Rise of the Drones

They go by many names, but whether they’re Unmanned Aerial Systems, Unattended Aerial Vehicles or simply drones, the sophistication and ruggedness of modern UAV systems has developed well beyond the hobbyist radio-controlled aircraft some of these miniature flyers resemble.

Capable of autonomous as well as remotely piloted flight, today’s UAV systems can fly from hours up to a day or more without landing, refuelling or reprogramming, in adverse winds and weather conditions. Equipped with myriad sensors coupled with sophisticated control architectures, they are, in essence, robotic aircraft, tasked with missions deemed too dangerous or laborious for human pilots.

While the term “drone” has a double-edged connotation, it’s the commercial uses of UAV systems that has many investors scrambling to strap in to an industry poised to climb sharply. According to the Teal Group’s 2014 market study, global UAV spending will grow to approximately US$91 billion in the next decade. Of that, the research firm estimates the civilian segment will expand to 14 percent (approximately US$12.7 billion) of the total market by the end of its 10-year forecast.

Those heady numbers, however, depend on reform of the regulations governing commercial UAVs. In most industrialized nations, drone use is severely restricted. In the U.S., for example, the FAA has banned all commercial drone use until it implements new mandated regulations for UAVs under 55 pounds by 2015. Other industrialized nations are similarly struggling to set parameters for their use.

Canada, however, has been at the vanguard of commercial UAV usage, says Robert Kendall, executive director of Unmanned Systems Canada, a non-profit industry association for the Canadian UAS community. At present, Transport Canada does require possession of a Special Flight Operation Certificate for commercial applications, but the fact that such permits are available at all, Kendall says, puts Canada way ahead in the industry.

“UAVs are now being commercially used in the oil and gas industry, forestry, agriculture and mining and everywhere in Canada, from the Arctic right through to Southern Ontario,” he says. “As one person said, where we have come, from the Wright Brothers to today in aviation, Unmanned Aerial Vehicles are making that same transition in one tenth the time.”

The Evolution of Drones
The potential of UAV systems has tipped into popular consciousness in only the past few years, but Canadian aerospace engineers have been developing drone technology since the middle of the last century. In 1963, Canadair (which later formed the core of Bombardier Aerospace) created Canada’s first drone, a rocket-launched reconnaissance UAV, called the CL-89, for Canadian and European militaries. Once airborne, the CL-89—and its larger sibling, the CL-289—flew conventionally by means of a turbo jet engine to collected images and sensor data along a pre-programmed flight path.

Today, Canadian-made small-UAVs perform the same function in both military and civilian roles, but at a fraction of the cost and with greatly expanded capabilities. In the sUAS space, Aeryon Labs may be the best known for its quad-copter drones equipped with remotely controllable HD video, still and IR-sensitive cameras.

“We play at the very high-end of the market,” says Dave Kroetsch, president and CEO of Waterloo-based Aeryon Labs. “If you are a police officer or a soldier, you may be facing gunfire while using our product. That doesn’t apply to our commercial customers but, from a product design point of view, we put a lot of emphasis on ease-of-use. That is, being able to hand our system to anybody—even someone who isn’t a pilot and may be under stressful conditions—and have them get the job done.”

Established in 2007, Aeryon Labs markets two sUAVs. It’s original, the Scout, made headlines in 2011 during the Libyan Revolution against Muammar Gaddafi. Rebels used the small Vertical Take-Off and Landing (VTOL) drone to gain reconnaissance on enemy positions during some of the heaviest fighting in the war torn city of Misrata.

Weighing three pounds, the Scout packs into a suitcase but flies for approximately half an hour at altitudes up to 15,000 ft. above sea level. In addition, the company says it operates reliably in temperatures ranging from -30 to 50°C and in wind gusts up to 80 kph (50 kph sustained). The SkyRanger—the Scout’s larger brother released last year—can fly nearly twice as long with bigger payloads in wind gusts of 90 kph and beyond line of sight up to three miles.

As with any professional-grade drone, Aeryon’s UAVs fly themselves; users program either via a point-and-click touch screen navigation system. According to Kroetsch, it’s this combination of a highly accessible control system paired with rugged hardware that separates a true UAV from an RC toy.

“It’s not just one thing; it’s a lot of little things,” he say. “In our case, it’s the very specific components we select. For example, we use things like motors designed for industrial high and low temperature range applications, carbon fibre propellers and digitally encrypted networks. Put all those things together and that’s what defines the overall user experience.”

Capable of flying continuously for more than 24 hours, Brican Flight Systems’ TD100 UAV is designed to perform tasks too hazardous for manned flights.

While small, VTOL drones like Aeryon’s excel at quick deployment in localized areas, some applications require an aircraft that can stay aloft longer and cover a wider area. Inspecting long stretches of remote hydro lines or oil pipelines, surveying the health of large crop fields and even monitoring wildlife populations are uses tailored to fixed-wing UAVs.

“There are a lot of pilots losing their lives because of conditions in remote areas, specifically where there is a hazard to the pilot — either through weather, terrain or shear boredom,” says Brian McLuckie, president of Brampton, ON-based Brican Flight Systems. “I think we were the first to recognize that the users of this technology want to employ UAVs so that the hazard to pilots is removed.”

Given that, McLuckie says the company developed its fixed-wing TD100 UAS to provide the widest applicability. Its 5-meter wing-span and 2-meter fuselage, combined with a carbon composite airframe, make for a light aircraft with a large payload capacity. In addition, the UAS can maintain a 120 kph cruising speed at up to nearly 15,000 feet.

In addition, the TD100 is highly modular, McLuckie says. For example, the aircraft can be outfitted with either an electric motor and battery—for shorter flights carrying noise and vibration sensitive payloads—or with a high efficiency multi-fuel engine for applications requiring heavier payloads and flight time up to 25 hours.

The TD100 capabilities have made it popular with scientific and environmental surveys, McLuckie says. For example, the National Research Council (NRC) adopted the TD100 as its “platform of choice” last year for the agency’s Civilian Unmanned Aircraft Systems program (CivUAS). It has also been employed by the Canadian Department of Fisheries and Oceans to capture images of Bowhead whales in its annual population counting and tracking studies.

However, the system is now making headway in defense applications as well. The Canadian Navy has contracted Brican to use the TD100 for anti-submarine surveillance.

“We’re using the same sensor technology on our UAV as would go into a CP-140 or a CH-124 Sea King,” McLuckie says. “The difference is that 10 UAVs could be launched and swarmed at altitudes from 300 to 10,000 feet. We can give the Canadian Navy a tool that should enhance sub detection by 10 fold at a fraction of the cost.” 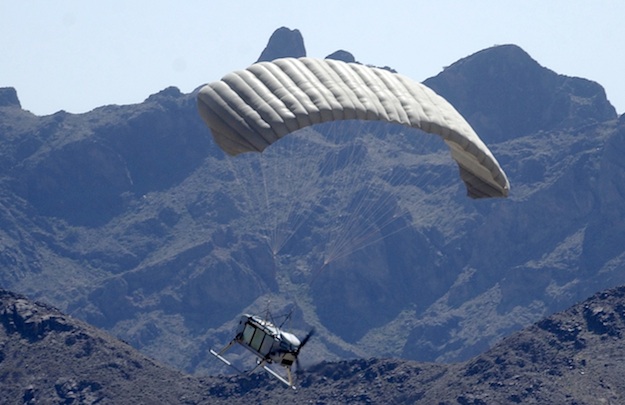 MMIST’s CQ-10 “SnowGoose” UAV is designed to transport more than 500 lbs. of cargo to locations as far as 800 km away.

Cutting costs from traditionally commercial air transport is a goal shared by Ottawa-based MMIST. Contrary to Aeryon and Brican’s relatively small, rotor-copter and fixed-wing systems, the company manufactures steerable parafoil UAVs designed to deliver heavy loads precisely over long distances.
“Within the UAV community, the vast majority are focused on small aircraft that stay within the comfort level of sport RC aircraft,” says Sean McCann, CEO of MMIST. “We’re not that company. We believe the UAV community has to bring itself in line with existing aviation standards.”

For MMIST, that distinction is important since it’s systems can carry payloads of approximately 4.5 metric tonnes, well beyond the under 55 pound weight limit the FAA’s forthcoming regulations will put on commercial UAVs. To date, however, MMIST’s customer-base has been largely in the defense market. Roughly 19 militaries currently use the company’s Sherpa family of Precision Aerial Delivery Systems (PADS).

In essence a guided parachute, the Sherpa uses GPS together with on-board sensors to pilot cargo or infantry to a pre-programmed location. Dropped from an airplane, the UAV can carry up to 10,000 pounds and land within 100 meters of its target.

While the Sherpa has been successful with militaries, the company sees the biggest growth potential in its powered UAV. Similar in concept to the Sherpa, the CQ-10 “SnowGoose” incorporates a propeller driven by a 110hp Rotax engine, which gives it significant range. For example, loaded with 100 lbs. of cargo, the UAV can fly for up to 15 hours or a range of 800 km. And unlike the Sherpa, the SnowGoose is fully autonomous, capable of returning home after cargo delivery without ground support.

“In places without dependable infrastructure, if you can move cargo with fixed-wing aircraft, there is a huge cost savings from reduced fuel consumption,” McCann says. “Whether the application is military, commercial or humanitarian, they all share the same attributes; the technology has to be safe and economical. That’s the theme we’re working on.”DE
www.aeryon.com
www.bricanflightsystems.com
www.mmist.ca