In February 2015, Defence Research and Development Canada (DRDC), the R&D branch of the Canadian military, caused a stir in defence circles when it released images of its latest weapon prototype – the Soldier Integrated Precision Effects Systems (SIPES) project. With its network connectivity, semi-automated targeting capabilities and video game-looking design, this “smart gun” was quickly dubbed by media outlets and gun enthusiasts alike as the “weapon of the future.”

It’s not hard to see why. Fashioned from metal and plastic 3D printed components and high strength steel, SIPES combines a light-weighted assault rifle with a grenade launcher or combat shotgun. More importantly, the sensor-laden prototype – a collaborative effort between DRDC, Colt Canada and Canadian Forces – represents a unique combination of electronics and mechanical components.

That union, designers say, gives SIPES the potential to acquire and share geolocation and other combat-related data with HQ, while also allowing soldiers to receive target data to help differentiate friend from foe and coordinate engagement. A heads-up display in the weapon site could also display target distance, remaining ammunition and other relevant combat information.

For all the hype, though, in reality the SIPES program is more like a concept car at an auto show. It may look futuristic and feature all of the latest technologies in a working unit, but don’t expect to see one in production. Instead, the DRDC says the SIPES project is pure R&D, meant only to showcase advanced technologies and non-traditional capabilities that may eventually inform future generations of weapon development.

“[SIPES] itself is not a development project,” explains Franklin Wong, an engineer at DRDC Valcartier. “It’s not like the army asked us to develop a new small arms weapon that someone would produce and give to the armed forces. This is what we call a technology demonstration project. The hypothesis is that if we started from scratch and worked on an integrated concept, we could include all the components we want up front. We could then design the interfaces between the components to get something that is lighter weight and integrated.” 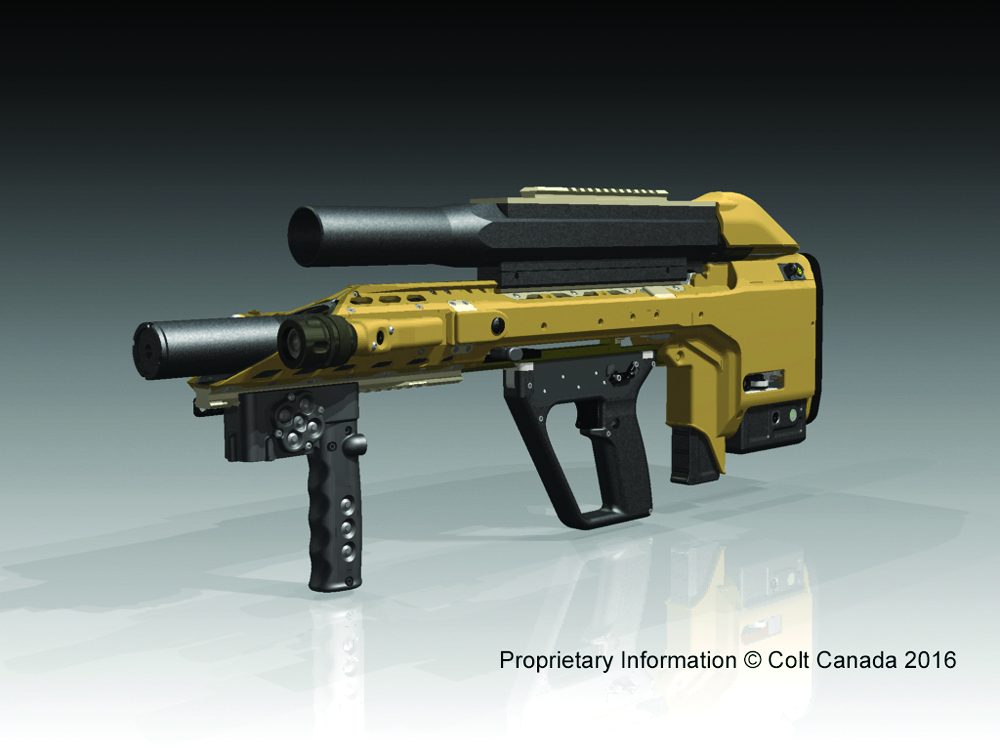 A CAD rendering of the design prototype.

“AAI’s Case Technology enables the bullet to be much smaller and lighter,” explains Brenton Teed, Product Support Engineer, Colt Canada. “Traditional bullets have a cartridge filled with gunpowder with the projectile crimped on the cartridge. It has a certain length, diameter and volume. The CT bullet is actually embedded in a polymer case, and unlike conventional ammunition, there is no extraction groove in the back, so to unload it…it had to be pushed forward. This meant the chamber had to be open on both ends.”

Another requirement the team had to design around was the need for increased firepower – in this case, it was the addition of a grenade launcher that can stack up to three rounds at a time. Developed by Metal Storm USA, this technology provides a distinct advantage over traditional grenade launchers that only house one grenade at a time.

“We wanted to give the soldier more fire power in something lighter weight,” explains Wong. “The rest of the weapon was designed around those two pieces of ammo.”

Once the ammunition was selected, the team was then able to explore lightweighting through material selection. Because the barrel is the heaviest part of the rifle and its size and weight are determined by the ammunition, the engineers explored using different material for the barrel. One thing the team learned was that high strength steel is still the best material for an assault rifle barrel; modern engineered materials like composites simply can’t stand up to the intense heat and pressure produced when firing rounds rapidly.

Ultimately, the team opted for a bullpup-style weapon in which the gun’s action is located behind the trigger. According to Teed, this provides a shorter gun length for a given barrel length. In addition, SIPES’ 20-inch barrel provides optimal muzzle velocity while decreasing the gun’s overall weight.

“We knew it was a prototype, so it wasn’t going to work perfect the first time; we designed this with that in mind,” Teed says. “Dynamic simulation in MD ADAMS solved problems before the prototype was built. High speed video showed us the other problems on the prototype. The ammunition was radically different from what we normally work with, so we were surprised by how it behaved under dynamic loadings.”

The “Smart” in Smart Gun

Aside from the hardware specifications, the project also required a level of electronic integration unusual for traditional weapons. The team explored integrating a power/data rail, which is used to attach accessories like flashlights, infrared illuminators or electronic devices. 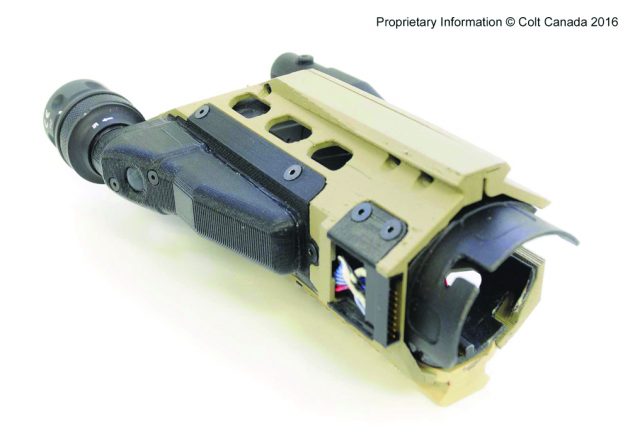 One of the great challenges, Wong says, is when accessories are added. They often come with their own battery systems, which can add weight and force soldiers to carry additional batteries. The advantage of the power/data rail is a single battery supply source feeds different accessories; this saves on weight and the logistics of running the weapon.

Colt Canada, under a separate effort, was developing its own rail system with centralized power, data, video and FCS control. The Colt rail was integrated into the SIPES weapon concept rather than retrofitting versions that were developed for other weapons.

The powered rail included a data bus, which allows for data from the weapon to be transferred elsewhere, either to another device or to an offsite location for higher-level processing. The rail also gave the team the opportunity to add sensors and determine how the data could be used for future iterations.

Since typical weapons don’t have a lot of electronics built into them, the team needed to find a way to successfully integrate both the electronic and mechanical components.

“We designed the right hand of the gun with mechanical features and the left hand of the gun had the electronics,” explains Teed. “All the panels would come off and there is the wire harness or the mechanics depending on the side you were working on.” Because this was a technology demonstration, the team was able to design the weapon in this unique fashion – having the ability to take the gun apart, reassemble and access certain parts were key. 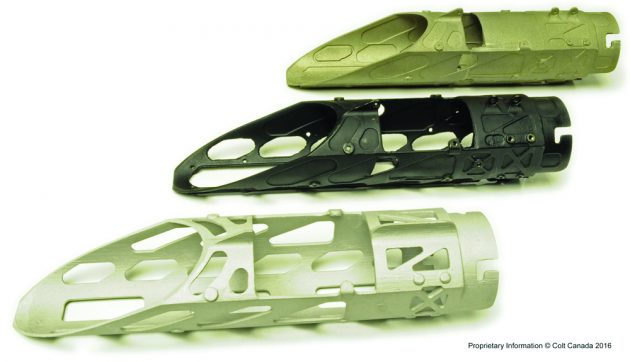 While integration is a good idea, Wong cautions that it requires a clear idea as to the requirement of the weapon. With the SIPES project, there were no target specifications so integration worked well. If the weapon needed to be used across a broad range of tasks, he says, the importance of flexibility and modularity may cause a decrease in integration abilities.

“You can’t get away from that,” Wong says. “In terms of informing our client, this is part of the process of deciding what their requirements are that we can bring to their attention. In essence, engineering is compromise.”