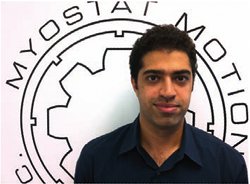 Earlier this year, Myostat Motion Control Inc. was asked by a Southern-Ontario manufacturer to increase the consistency of their automated assembly equipment.

As part of the assembly process, we integrated an analog load cell or force sensor, a servo motor and an actuator to push on a target surface for a set amount of time with a precise amount of pressure.

Our challenge was to control the force without any resulting vibration on either the digital or the analog output. In order to meet this objective, Myostat’s engineering team worked through a range of possible solutions.

First, the force feedback sensor was set up to the output digital signal and a logic design force control was employed. While this simple solution allowed us to reach the desired pressure performance, vibration and faults in the force sensor measurements were observed.

Next, inspired by the concept of switching controllers, we implemented a new “two-stage switching on/off logic control” integrated with PI feedback control using the digital output force sensing. The two-stage on/off PI controller was applied with adjustable switching frequencies and amplitudes to optimize the performance. This solution provided a much more robust and precise result than a typical PI feedback control but we were still not completely satisfied with the performance.

Finally, in order to achieve the most robust and precise results, we made the decision to implement Sliding Mode Control using the analog output of the force sensor. While this is a more complex solution, it provides us with the best results and is one of the most promising techniques in Robust Control Systems.

Sliding Mode Control (SMC) is rapidly gaining popularity due to its practical success and fairly straightforward firmware implementation. SMC produces a discontinuous on/off signal that forces the system to slide along the desired system’s behavior. Unlike Proportional Integral Derivative (PID) controllers, which are perhaps the most commonly used feedback controller, SMC uses a discrete sliding decision rule in which the system flows through both continuous and discrete modes resulting in a hybrid feedback configuration.

Outlined below is the basic theory behind Sliding Mode Control. For simplicity, we have used a double integrator system for our example:

Where u(t) is the feedback controller.
The sliding decision rule is defined by

.
The design parameter ‘m’ is a positive scalar.

Now, by introducing a switch between two controllers as:

, a stable and robust closed-loop system is
obtained if:

. This condition is guaranteed for Figure 1: Illustrates how the point (y, dy/dt) spirals in toward the origin and the SMC (controller u(t)) asymptomatically stabilizes the motion.

Note that this diagram is a visual reference only and is not intended to be an accurate numerical representation
of SMC behavior.

Figure 2: To avoid high frequency chattering of SMC, a saturation function can be employed as depicted in this block diagram of the Sliding Mode Control outlined above.

Additionally, the lifetime of the hardware components may be reduced resulting in higher maintenance and equipment costs. The art of control engineering is to ensure the stability and high performance levels in practical applications and harsh industrial environments in spite of the large discrepancies and mismatches.

In SMC, the sliding decision rule takes in some measures of the current system behavior and produces a switching feedback controller. In the architecture of SMC, the controller is designed to drive, force and confine the system state to lie within a very small neighborhood of the switching function despite the disturbances and perturbations in harsh industrial environments, modeling discrepancies, and variations in system parameters in practice.

The ease of implementation and short computational and numerical algorithm required in the implementation of SMC in microcontrollers is another advantage of this technique. Sliding Mode Control does not suffer from latency for real time application and is compatible with standard communication protocols such as RS-232, Ethernet/IP, and Modbus. SMC has been successfully applied in a wide range of industrial applications such as robotic systems, automotive, furnace control and aerospace systems.

In modern manufacturing, designers are often asked to push the envelope of quality control and consistency. By thoroughly investigating a series of solutions, rather than settling for a quick fix, it’s possible to meet client expectations and provide processes that are extremely consistent and predictable.
www.myostat.ca

Reza Raoufi is a control engineer at Myostat Motion and holds a PhD in Electrical and Computer Engineering from the University of Alberta.