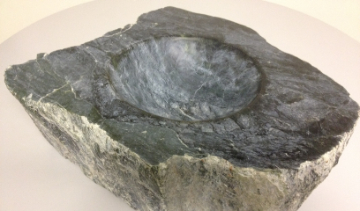 To his customers Ray Brougham is many things—engineering wizard, tweaker, possessor of numerous skills—and the builder of a unique and growing prototype business in Victoria, BC. Put simply, Prototype Equipment Design (PED) is a fluid hive of problem-solving activity where engineering ideas transform into reality.

“About half the time we work from fairly well-established plans; about 25 per cent of our projects are tweaking something that’s already constructed. The other 25 per cent of the time we are building from scratch—sometimes literally from what’s been drawn or a napkin or two,” Brougham says. “Right now, for example, we have a project where it’s totally up to us how we tackle it, working with a sculptor who needs a quick way to shape and cut large pieces of jade.”

An unfinished jade sink, which will soon be worth more than $25,000, is one of many one-of-a-kind items in the large shop area. The place is chock full of unrecognizable bits and pieces along with a large number of computer-controlled machines that produce the unique items Brougham and his staff of 16 create. The idea to go his own way came to Brougham after he had worked for Redlen Technologies, a nearby manufacturer of gamma and x-ray detectors.

“I was doing lithography, placing pixels on semiconductors twelve years ago, and I wanted to use that experience with other companies,” he says. Eleven years ago, he started branching out on his own, but still works for Redlen one day a week.

PED projects span the medical, aerospace, military, security and research sectors. For example, a contract from the University of Victoria and the Canadian Space Agency involved building a microgravity simulator for growing semiconductor boules in space. One of the most challenging projects was working with the Hertzberg Institute to create a series of identical Band 3 hetra-dyne receiver waveguides used to align the main receivers in each of the 66 radio telescope in the ALMA project array in Chile—to a precision level of less than 10 microns.

PED also currently serves as a first-level supplier of hull fasteners for Babcock Canada, the company retrofitting Canada’s submarines. “We’ve built a full-scale replica of the submarine control room so that we can make new parts that will make repairs easier,” Brougham adds.

Deadlines are sometimes pretty tight. “We recently had two weeks to build a submersible sonar prototype from drawings that took the inventor months to create,” Brougham remembers. He says most solutions come from individual and group brainstorming, but sometimes from a comment or question from an employee not working on the project—or who actually may not be involved with the engineering and design side of things at all.

He considers his highly-skilled and well-trained staff to be the primary determination of the company’s success. “I have a great team, but as we’re getting bigger and more complicated, we’re having some growing pains,” he says. “It’s tough to keep everyone moving forward because I don’t like hierarchical situations, but my team is asking for more structure. We need strict protocols for handling special materials and guidelines for sharing resources.”

Although the machining side of the business is stable, Brougham wants to diversify and gain traction in the printed circuit board (PCB) assembly market. With the current North American market continuing to move business offshore in order to keep manufacturing costs down, Brougham sees an opportunity to provide a service to companies who are looking for quality with assembly of PCB prototypes.

“In Victoria, there are 800 tech companies, and at least a quarter are doing something with circuit boards,” he says, “so I am establishing us as an assembler and seeking out opportunities to make first runs of 20 for trade shows and so on.”
http://engineersmachineshop.ca