The Future of Automotive Design? 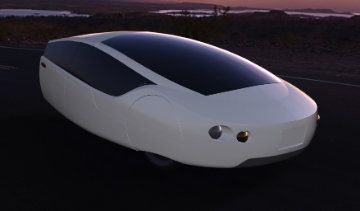 If there’s one thing Jim Kor can’t abide in automotive design, it’s wasted energy. That’s not to say he’s a zealot. The 60-year-old design engineer from Winnipeg still drives his ‘68 Chevy truck and, over his lifetime, has raced Austin Minis, tinkered on numerous sports cars and even owned an RV or two.

Yet, since 1996, Kor and his nine-member team of like-minded engineers at Winnipeg-based consulting engineering firm, Kor EcoLogic, have toiled off and on to design, build and eventually market the Urbee, their vision of the ultimate alternative-energy vehicle.

Recently, the company announced it has begun work on the next iteration, named the Urbee 2. Longer and more polished than the original, the next prototype is intended to demonstrate that the “greenest car in the world,” can also appeal to a mass audience.

It may seem like an idealist’s dream but, to Kor, a vehicle like the Urbee is the inevitable conclusion when you combine an engineer’s drive for the practical with a realist’s understanding of projected auto usage globally and the resulting environmental impact.

“There are 1 billion cars on the road now. In 35 years, there are going to be about 2.5 billion new cars, so it’s really about what they should look like,” Kor says. “Too often, I think we listen too much to the economists and not enough to the ecologists, who are telling us we’re in real trouble.”

Efficiency at All Costs
The prototype version of the tear drop-shaped Urbee (short for Urban electric with ethanol), first grabbed headlines when it entered the Progressive Automotive X-Prize in 2009. Distinctive for its futuristic look and 3D printed body, in reality its shape and plastic exterior shell are simply part of the vehicle’s overall design equation. According to Kor, creating a truly energy efficient car starts with challenging the norms of automotive design.

“People usually ask us if this is an electric or a hybrid; they just want to know the technology,” he says. “Actually, our goal is to create a low-energy car so we can run solely on renewable energy. To achieve that goal, you got to use whatever technology will get you there.”

Specifically, Kor says low-energy means a car that has energy requirements so small, its fuel can be produced “off the grid” (e.g. by rooftop solar panels and/or home grown ethanol crop). As a consequence, this imperative has led the Urbee’s creators to make some unconventional design choices.

Take, for example, the hybrid’s power plant and drive train. Since the Urbee is intended for city and highway driving, the two-seater relies on a pair of 4-hp DC electric motors to drive its front tires (one per side) coupled with regenerative breaking for the stop-and-go of urban driving. At these lower speeds, the Urbee needs to be as light as possible to overcome inertia.

“Over the last 100 years, when an engineer has tried to make a really efficient car, they typically make a three-wheeler,” Kor says. “Our analysis showed that eliminating a wheel doesn’t change rolling resistance much. The reason is that you don’t need the weight of the fourth wheel along with the suspension, break assembly and everything else.” The Urbee 2’s small frontal area, low profile and Kamm-back tail combine to give it an exceptionally low .15 drag coefficient.

On the highway, at speeds above 70 kph, the three-wheeled hybrid switches over to its 4-cycle diesel engine that can propel the Urbee to a top speed of 120 kph while charging its battery, yet has an output of a scant 5 hp. Making this possible required that the Urbee be as aerodynamic as possible. Consequently, the car has an uncommonly small frontal area (14 sq. ft.) along with a coefficient of drag of only 0.15.

“To cut through the air, you don’t need an arrowhead; you want just the opposite: A blunt nose with rounded edges,” Kor says. “Once you burst through the air, you have to bring the air back together again. You can do that at about 15 degrees of taper at the speeds we’re talking about. Any more and the air begins to separate. It looks like a torpedo with a round blunt nose then a tapering off to the pointed tail.”

Since a pointed tail is impractical, Kor says, the Urbee’s rear end features a sharply truncated tail, called a Kamm-back or K-tail design, which significantly reduces or eliminates turbulent airflow.

“All those backend edges are blindingly sharp because you have to fool the air to keep going,” he says. “If you put even a one-inch radius on it, the air starts to curl as it leaves the car and the vortex causes drag.” Digital Manufacturing
To get the organic shape needed to preserve the Urbee’s exceptional aerodynamics, Kor says the team originally planned to make the body out of fibreglass—a material they were familiar with and that could be fashioned by hand. But, from the beginning the Urbee has been a self-funded project, which made the high tooling cost of sheet metal impractical.

However, Kor says fibreglass is toxic, generally unpleasant to work with and violated another his design principles—that the materials in the Urbee be largely recyclable. When the team learned that Stratasys’ service bureau division, RedEye On Demand, could print and fuse 3D printed parts into larger structures, Kor decided to try it as simply a prototype body to cover the original Urbee’s chassis.

“Once we had a 3D model of the Urbee and we knew it could meet the target coefficient of drag, we met with Stratasys and asked if they could 3D print it,” Kor says. “I looked at because it would give us the sharp edges we needed, which are hard to do in fiberglass.”

Based on the success of the first prototype, Kor says the Urbee 2’s body will embrace true digital manufacturing, which will free its designers to create parts that can’t be manufactured any other way. Composed of approximately 30 exterior panels printed on Stratasys’ Fortus machines, the Urbee 2’s body will include an exterior and interior skin, made from recyclable plastic. In addition, all visible interior components of the future prototype will also be 3D printed.

As it stands now, the Urbee 2 is still in the design phase. By 2015, however, Kor says the goal is to drive the high efficiency vehicle from San Francisco to New York City, using only enough ethanol to fill the vehicle’s 10 gallon tank. In addition to its exterior body, all the Urbee 2’s visible internal components will be 3D printed.

“We’ve done the calculations but I’m not saying the car can do it; I’m saying it could do it,” Kor says. “I make it clear that it’s our goal. We fully understand that if we don’t do it with very little fuel, why would people compromise to drive a car like this?”

In the meantime, Kor and his team are looking to secure funding. As with nearly everything else about the Urbee, financing may take an unconventional route. The company is currently exploring a Kickstarter.com campaign to help it carry the project forward.

Once finished, Kor says the next step will be finding a partner who can produce the Urbee for a global market.

“It’s completely unrealistic for a small group like ours to make a car,” Kor admits. “The only way the Urbee will have an impact on a global scale, with 2.5 billion cars projected, is if you sell a billion of cars like this. Today, only a car company can make a billion of anything.”
korecologic.com