The physics of the 2010 World Cup - Design Engineering
COVID-19 UPDATES:

Why the Adidas soccer ball, Jabulani, promises to confound goalies with its ‘otherworldly’ behavior. 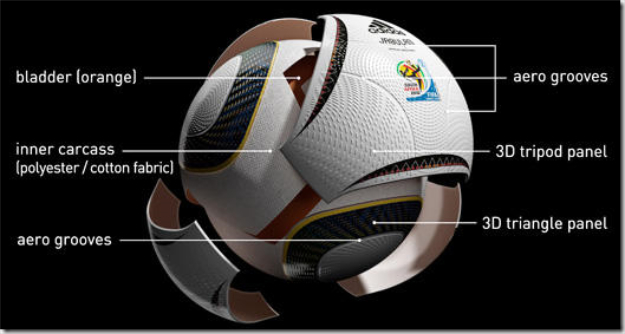 As the World Cup finals kick off, the most talked about and controversial figure in the game isn’t a player but Jabulani, the new Adidas World Cup soccer ball (the name means “to celebrate” in isiZulu). Designed by researchers from Loughborough University, United Kingdom, the ball has drawn considerable criticism from players. Goalies in particular have described the ball’s in-air behaviour as “ridiculous”, “shameful” and even “supernatural”. Not only does it travel faster than previous World Cup models but players say the ball’s curve through the air or “bend” is erratic and unpredictable.

This unexpected behavior, explained Adelaide University physics professor, Derek Leinweber, in a recent pod cast, is due to Jabulani’s combination of unique design features. First, he says, 2010 World Cup ball differs from the classic 32-panel design in that Jabulani has no stitched seams. Instead, it is composed of eight thermally bonded segments, moulded from thermoplastic polyurethane-elastomer to allow for a nearly perfect sphere.

This results in a soccer ball with significantly different aerodynamic properties. As Prof. Leinweber explains, the travel of a sphere through a fluid like air creates a very thin boundary layer or ‘skin’ of airflow. Up to a certain speed, this boundary layer moves over the ball’s surface in a smooth, even and, in aerodynamic parlance, laminar flow. More importantly, at slower speeds, the boundary layer separates from the ball’s surface at a 90-degree angle—imagine rain hitting the top of an umbrella, running down the sides and dripping off the edge—which creates a large wake behind the ball with a high drag coefficient.

However, when a soccer ball travels above a critical transition speed, the airflow becomes turbulent and the boundary layer “sticks” to the ball’s surface, separating at around a 120-degree angle. This time, imagine raindrops falling on a beach ball, rolling down its sides and dripping off near the bottom. The result is a much smaller wake and therefore less drag. According to Leinweber, skilled strikers will use this phenomenon to their advantage. As the ball comes off a player’s foot, the airflow is turbulent and efficient. But, as the ball slows in flight and dips below the critical speed, the airflow becomes laminar and the sudden increase in drag acts like an air break.

What makes the Jabulani ball frustrating for goalies and strikers alike is that the ball’s laminar-to-turbulent transition speed is higher than the classic 32-panel ball. While some players have put the ball’s speed down to it being lighter than previous designs, Jabulani, at 440 +/- 0.2 grams, is actually at the heavier end of FIFA’s design guidelines (420-445 grams).

World Cup goalies have also complained that Jabulani curves or “bends” much more dramatically and unpredictably. According to Leinweber, this is due to what Adidas markets as its Grip ’n‘ Groove profile. Unlike the smooth surface of the 2006 World Cup “Teamgeist” ball, Jabulani has “aero grooves” and concentric circles of ridges that cover its surface.

To understand the influence of the grooves and ridges on the ball’s aerodynamic characteristics, it’s important to first look at what causes a ball to curve in the first place. As a ball spins, Leinweber says, the hemisphere that is spinning back toward the kicker accelerates the boundary layer’s flow around the ball while the hemisphere spinning away from the kicker impedes it. Consequently, due to Bernoulli’s principle, air pressure drops on the fast airflow side of the ball and increases on the impeded side. Like an airplane wing, the difference in air pressure creates lift, which influences the ball’s flight either vertically, horizontally or a combination of both.

In addition, the spin will cause the boundary layer of air to stick to the ball on the hemisphere rotating back toward the kicker but will separate earlier on the side spinning away from the kicker, creating a larger wake. The combination of the two aerodynamic phenomena, lift and wake, cause the ball to bend in the direction of the spin.

In the case of the Jabulani ball, the aero-grooves and concentric ridges act like the dimples on a golf ball, adding greater grip (and impedance) of the air as it flows around the spinning ball and therefore significantly increases the forces that cause bend. In addition, the ridges and grooves also change the transition speed from laminar to turbulent airflow, thereby enhancing the ball’s aerodynamic efficiency and speed.

According to Adidas, researchers at Loughborough University spent six years, many of them in a wind tunnel, perfecting Jabulani’s fluid dynamics to make for one of the most accurate balls in World Cup history. Whether that’s true or not is debatable but the new ball design does promise to be livelier. And while players may not appreciate the finer points the new ball’s aerodynamics, its unpredictable behaviour could translate to more dramatic play, higher scoring games and stadiums full of spectators who have something to celebrate.
www.adidas.com
www.sciences.adelaide.edu.au