Car maker dedicates $2.6 billion toward plant restructuring and its Automotive Research and Development Centre in Windsor. 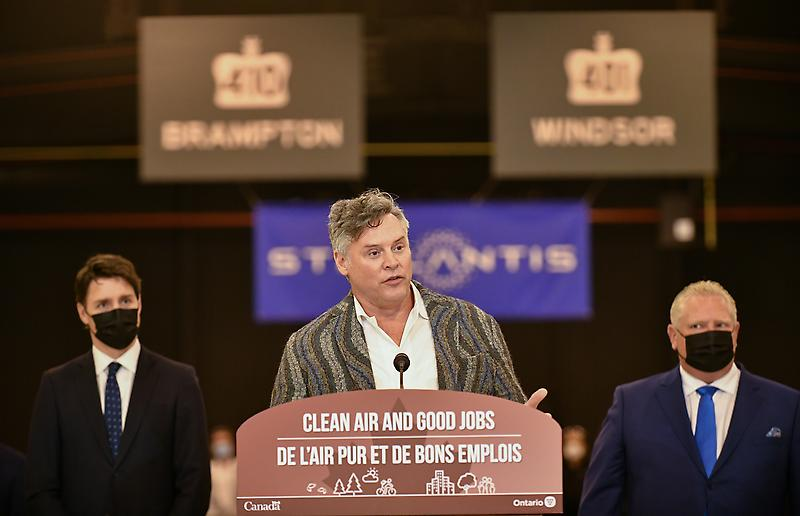 Stellantis, the new company created a year ago by the merger of Fiat Chrysler and France’s Group PSA, is investing another $2.6 billion to its electrification projects.

They include creating flexible assembly lines that could pump out battery-electric and hybrid vehicles at Stellantis plants in Windsor and Brampton.

Stellantis is also expanding its research facility in Windsor to include a battery pack testing hub and an electric vehicle research centre.

Innovation Minister Francois-Philippe Champagne says this is a major vote of confidence in Canada’s auto sector.

Champagne says there is a seismic shift underway in the auto sector and Canada’s industry is playing a big part of that.

“This is a major milestone for made-in-Canada electric vehicles,” Champagne said in an interview.

In March, they each promised almost $190 million for the Honda plant in Alliston, Ont., including to upgrade it to produce electric vehicles.

With 500,000 jobs and a $16-billion contribution to Canada’s GDP, the auto sector is a critical part of the Canadian economy, but it has moved slowly to adjust to the future of electric vehicle manufacturing.

There are currently only a few zero-emission vehicles coming off Canadian assembly lines, including the Chrysler Pacifica hybrid made at Stellantis’s plant in Windsor and the Lexus RX 450 hybrid and Toyota RAV4 hybrid, both made at Toyota’s plant in Cambridge, Ont.

Champagne said with supply chain uncertainty and other global challenges, it’s a big win to have Stellantis look to Canada for these investments.

“So for me to have a company like Stellantis who really had a choice to put these in Europe or North America, and decide to put that in Canada, is a major vote of confidence in our workers,” he said.

Stellantis wants half of its North American vehicle sales to be electric by 2030.

Canada is aiming higher with a goal that one in five new vehicles sold be zero-emissions by 2026 and 60 per cent by 2030. By 2035 Canada intends to bar the sale of new internal-combustion engines in passenger vehicles.

In 2021, EVs exceeded five per cent of the total vehicles purchased for the first time.

The government will shortly announce details of a sales mandate that will enact quotas and financial penalties for dealerships that don’t meet electric vehicle sales share targets.
www.stellantis.com