Festo BionicKangaroo gets a jump on Hannover Messe

As is its tradition, international automation giant Festo, through the company’s Bionic Learning Network, has revealed the latest of its nature-inspired robots, the BionicKangaroo. As in previous years, the unveiling is in anticipation of the company’s appearance at the massive Hannover Messe industrial expo held annually in Hannover, Germany in early April.

Unlike the SmartBird or last year’s impressive BionicOpter, which highlighted the high-speed coordinated precision of the company’s electric motor technology, this year’s creation depends as much on Festo’s pneumatic components for its characteristic leaps. The BionicKangaroo is also decidedly earth-bound; in fact, replicating the efficient motion of a kangaroo depends on that.

The reason is that, in the wild, kangaroos are notable for an evolutionary adaptation that allows them to hop progressively faster and higher but without consuming much more energy. The principle mechanism behind this is their exceptionally long legs and elastic Achilles tendon. As the kangaroo lands, the tendon elastically stores the kinetic energy of its previous leap. That energy is then released to propel the next jump, thereby minimizing input from the animal’s thigh muscles.

Similarly, Festo’s BionicKangaroo uses what the company refers to as “an elastic spring made of rubber,” — strung from the robot’s foot to its knee-joint — that cushions the impact and recaptures the kangaroo’s momentum as it lands.

However, what amounts to a rubber band alone isn’t enough to create the animal’s stable kinematic motion. In place of leg muscles, the robot incorporates two of the company’s DSNUP 20 pneumatic cylinders connected to the lower legs. Using either a small on-board compressor or high-pressure storage device, the cylinders pre-tension the rubber tendons while servomotors at the hip joint shift the robot’s center of gravity forward.

When the BionicKangaroo reaches the optimal angle to jump forward, two solenoid valves release the tension. While in the air, during the leap phase, the servomotors in the hips thrust the legs forward to help propel it and properly position the feet for the landing.

Of course, generating a powerful leap is only a small part of the overall equation. That forward momentum needs to be controlled to make sure the robot stays balanced in the air. As in nature, the BionicKangaroo’s tail helps stabilize the robot in flight. 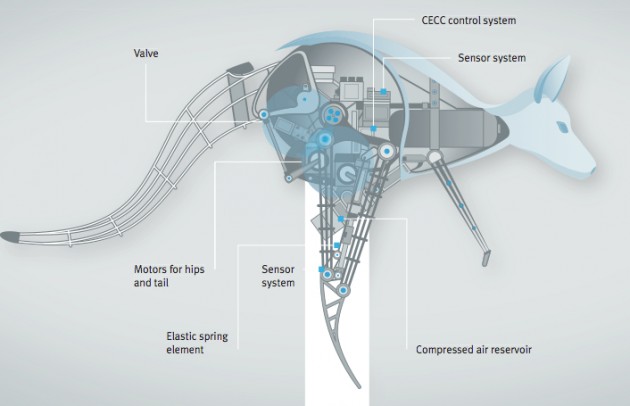 Guided by heading and potentiometer sensors in the torso, a servomotor in the tail provides the necessary counter-acting motion to prevent the robot from flipping too far forward or back in air. The tail also acts as a third point of contact to keep the robot upright while standing still.

In addition to forward leaps, the BionicKangaroo can also turn left or right on the ground. The servos attached between the robot’s hip and thigh allow each leg to be actuated individually. A small rechargeable lithium polymer battery supplies power for all the robot’s systems.

To synchronize the robot’s coordinated motion, the BionicKangaroo incorporates one of the company’s CECC control systems. In all phases of the jump cycle, the small hybrid controller processes signals from the robot’s sensors to proportionally fire the pneumatic cylinders, valves and electric motors as needed based on a complex control algorithm.

In large part, this weight savings is due to the robot’s unique “bones.” Underneath the light foam head and torso casing, Festo’s bionics engineers laser sintered (3D printed) the robot’s limbs, tail and internal structure in nylon and reinforced the lattice with carbon fiber tape. The result is a structure that’s both strong and flexible enough to absorb the stresses of the jump cycle while also light enough to reduce the power requirements of the system.

Operating the robot is accomplished via an armband remote that connects to the BionicKangaroo’s internal controller via Bluetooth. Sensors in the armband interpret input from the operator’s forearm muscle as he or she gestures for the robot to move forward, stop or turn left and right.

While the BionicKangaroo is an impressive show-off piece for Festo and will certainly be an attention getter when it hops onto the show floor at Hannover Messe early next month, the company says its bionic contraptions serve as more than mere showmanship. The intent is to demonstrate that diverse systems (pneumatic and electric) can be precisely harmonized in a small space through a combination of real-time control, permanent diagnostics and energy efficiency.
www.festo.com/bionic