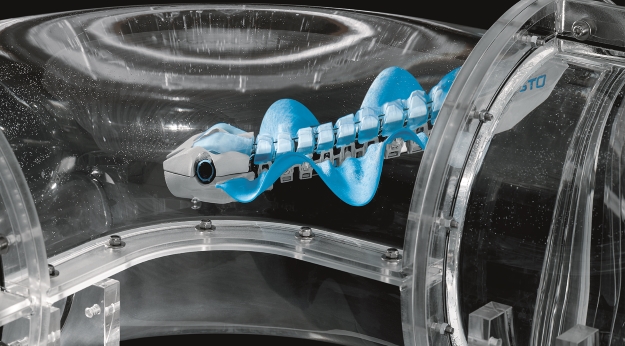 As has become a tradition in the automation world, Festo recently revealed its latest pneumatically driven robots in anticipation of April’s Hannover Messe 2019. In fact, the German automation company is one of only a small handful of fluid power component manufacturers to champion research and innovation as a central part of its business strategy.

Most years, the automation company debuts a mechanical animal, such as last year’s bat-like BionicFlyFox and 2017’s OctopusGripper. This year, however, Festo pushed the BionicSoftHand and BionicSoftArm, a human-like pneumatically-driven hand and an arm, both designed to work in close collaboration with human workers. 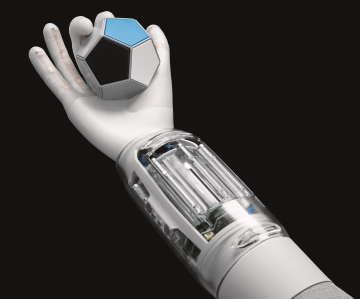 In line with the cobot and soft robotics concepts, Festo’s BionicSoftHand doesn’t have bones. Instead, its fingers consist of flexible bellows structures – air chambers wrapped in a 3D textile knitted from high-strength, elastic threads. Varying the weave of the fabric makes it possible to control where the structure expands and where it doesn’t. As a result, the human-like fingers are flexible, adaptive and sensitive, but still capable of exerting strong forces, the company says.

Rather than weigh the BionicSoftHand down with servo motors, the designers developed a digitally controlled pneumatic valve terminal mounted directly on the hand. This allows each finger to be supplied by a short air tube from the “wrist” and controlled by proportional piezo valves while the overall system is supplied by a single air tube through the arm.

For control, Festo has paired the robotic hand with an AI routine that learns by trial and error. Instead of imitating a specific action, the hand is given a goal, which it gets progressively nearer to accomplishing through positive and negative feedback. Sensors at its finger tips and “knuckles” provide the necessary tactile feedback. As a demo, the BionicSoftHand was tasked with rotating a 12-sided cube so that a particular face points upwards by the end of the task. The movement necessary to complete the task is taught virtually to the robot-hand’s digital twin with assistance from 3D depth sensing cameras.

While not a companion to the hand, Festo’s BionicSoftArm follows the same design principles. The cobot’s modular elephant-trunk-like design allows for up to seven pneumatic bellows segments and rotary drives. According to the company, this gives the arm flexible reach and mobility. It can be fitted with range of Festo grippers, depending on the application. The soft bellows also allow it to operate in the same space as people, eliminating the need for safety cages or light barriers.

Lastly, Festo did unveil a new robotic animal, the BionicFinWave, that takes its inspiration from the way that the fins on cuttlefish and acquatic flatworms undulate, rather than flap, to propel them through the water. This principle allows the BionicFinWave to maneuver forwards or backwards through an acrylic tube system.

The BionicFinWave robot’s side fins are cast out of silicone and don’t require struts or other supporting elements. The two fins are attached to the left and right of nine small lever arms, which in turn are powered by two servo motors. Two adjacent crankshafts transmit the force to the levers so that the two fins can be moved individually to generate different shaft patterns.

The undulating fins are particularly suitable for slow and precise locomotion and whirl up less water than, for example, a screw drive. A cardan joint is located between each lever segment to ensure that the crankshafts are flexible. For this purpose, the crankshafts including the joints and the connecting rod are made of plastic in one piece using the 3D printing process.

The remaining elements in the BionicFinWave’s body are also 3D-printed, which enables its complex geometries in the first place. With their cavities, they act as flotation units. At the same time, the entire control and regulation technology are watertight, safely installed and synchronised in a very tight space.
www.festo.com