Increasingly individualized products and more intelligent, networked components are transforming the world of production, and Festo is embracing the changes.

That was the message from Dr. Eberhardt Veit, chairman of the management board of Festo AG, during Festo’s recent International Press Conference at its headquarters in Esslingen, Germany.

“A lot of companies are complaining about the fast changes, about the future. Festo is a company that [views] the changes as opportunities,” said Dr. Veit.

And they’re acting on these opportunities, as members of the international technical press — including Design Product News – learned at the recent conference.

Their products, research, training and investments all support their view of what production of the future will look like.

Festo has adopted an integral approach in the quest for the production of the future. In Industry 4.0, products and processes must “fit together in one intelligent system, intelligent factory,” said Dr. Veit. “I think intelligent products are really the basis of Industry 4.0.

“We regard Industry 4.0 as a highly interdisciplinary future project, in which we constantly co-operate with partners from the fields of industry and science. Festo is involved, among other things, in a number of co-operative research projects that deal with various aspects of the production of the future,” said Dr. Veit. 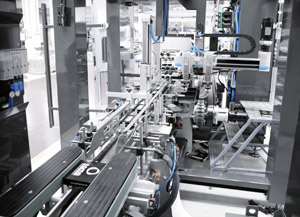 Festo predicts that the automation pyramid will undergo an evolutionary transformation. The vision is of a fully networked, adaptive production process that assumes the components themselves will become more intelligent and be bestowed with additional functions, so that they can collaborate to establish their own networks. According to Festo, in the future, humans and machines will co-operate more closely, more frequently. The robots of the future will interact with humans and avoid collisions with them by means of intelligent sensors. Thanks to advances in intelligence, these machines represent an increasingly smaller hazard in interactions with humans and instead support them by relieving the burden of day-to-day work, for example in assembly.

But Festo isn’t just looking at technology. The company is also giving consideration to the future role of the human operator.

“Not only the technological developments are important, but also the question of what role the human will play in the overall context of production of the future, and how an enterprise can prepare its employees accordingly,” said Dr. Veit.

Advances in employee know-how must keep pace with the increasingly sophisticated information technology. The technical development objectives of Industry 4.0 must be co-ordinated with the working world and new training needs. The company said Festo Didactic, its industrial training and vocational education arm, meets these requirements by developing and providing suitable teaching and research platforms.

At the press conference, Festo showed what the production of the more distant future could look like with its Future Concepts — for example, its research projects focusing on superconductivity. When cooled to a certain temperature, superconductive materials can “freeze” the field of a nearby permanent magnet and hold it in suspension at a fixed distance. The stable air gap thereby produced allows the contactless storage and movement of objects without friction loss or the need for control mechanisms. 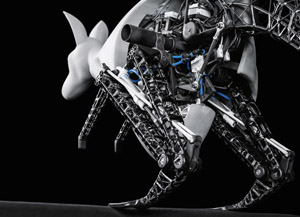 And the company’s BionicKangaroo — a project from its Bionic Learning Network — also addresses aspects of future production. The development team spent two years recreating the jumping behaviour of the natural kangaroo as closely as possible and learning from it. The result is the BionicKangaroo, which recovers and stores energy, retrieving it on the next jump, just like the creature it was inspired by. It can be controlled with gestures by means of an armband, which registers the muscular activity of the operator. Projects developed from the company’s Bionic Learning Network look at principles from nature with the purpose of gaining inspiration for technical applications and industrial practice as it prepares for the factory of the future.

Festo is taking a further step towards the production of the future in the form of the Technology Plant currently under construction in Ostfildern-Scharnhausen, a few kilometres from Festo’s headquarters in Germany. When complete, this will be a production site for valves, valve terminals and electronic components. It will also be used to train and show customers how to innovate their production and prove that they can produce products competitively.

Energy efficiency was also a hot topic at the conference, with the launch of Festo’s “Experience Energy Efficiency” exhibition, located at its corporate headquarters in Esslingen-Berkheim.

“For us, energy efficiency is a competitive factor and must be consistently established on an interdisciplinary basis as a fundamental requirement for the development process,” said Dr. Veit.
{nomultithumb}
The “Experience Energy Efficiency” exhibition allows customers to directly experience the topic of energy efficiency with videos, interactive exhibits and exhibition modules that demonstrate the company’s products. The focus is on a four-step approach that encompasses the interplay of intelligent systems design, energy-efficient products and solutions, sustainable services and a sound vocational training.