CAPE CANAVERAL, Fla. – In a tantalizing first, scientists have discovered water at a planet outside our solar system that has temperatures suitable for life.

Two research groups – one of them Canadian – announced this week that they’ve found water vapour in the atmosphere of a planet 110 light-years away in the constellation Leo.

This so-called Super Earth is just the right distance from its star to conceivably harbour life.

Discovered in 2015, the planet known as K2-18b is twice the size of Earth with eight times the mass.

While it’s thought to be rocky, no one knows if water’s flowing on the surface.

In the journal Nature Astronomy, the University College London team reports this is the only exoplanet known so far to have both water and temperatures needed for life.

The team says the planet’s star and atmosphere are so different than ours that Earth-like conditions are not possible – but at this point, it’s a question of habitability.

In a paper just submitted to the Astronomical Journal for publication, scientists from the University of Montreal suggest it might even be raining there.

Lead astronomer, Assistant Professor Bjorn Benneke, says this represents the biggest step taken yet toward our ultimate goal of finding life on other planets – of proving that we are not alone.

The research teams used archived data from the Hubble Space Telescope and other spacecraft to analyze the planet’s atmosphere.

Further observations are needed to determine whether the planet is indeed a true water world, using next-generation observatories like NASA’s James Webb Space Telescope and the European Space Agency’s Ariel, both due to launch in the 2020s.
www.umontreal.ca 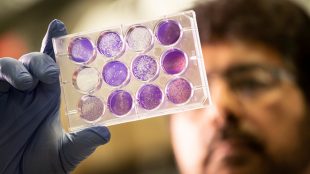