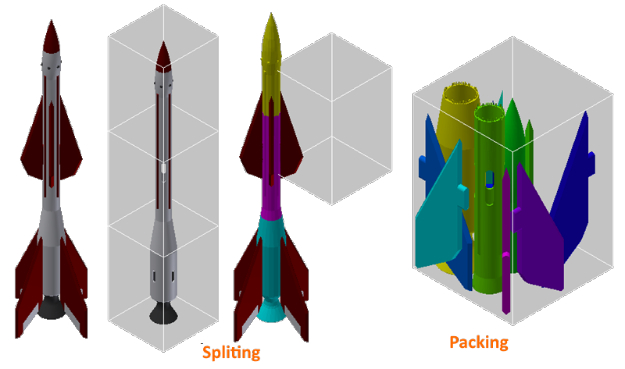 As the cost of consumer-level and lower end professional 3D printers continues to decline, they all suffer from one limitation: A relatively small build space. Expert designers can create customized divisions and joining features, but this may lead to a lengthy trial and error process that wastes of time and plastic.

To take some of the frustration out of the process, India-based CAD development company, CCTech, recently released 3DPrintTech 2.0, a CAD plug-in that helps users divide large object into small connectable components that fit the build volume of any 3D printer. The free application also packs or nests these smaller objects so they can be output in one or fewer jobs.

For nesting, the plug-in includes a 3D Packing feature that collects and positions the smaller components to fit within the selected printer’s build volume while eliminating interferences between parts.

In addition to splitting and nesting, the plug-in also allows processed objects to be scaled, exploded and exported to STL format. As a plug-in, 3DPrintTech functions non-descructively within the CAD design environment, allowing for multiple design iterations without modifying the original data.

The company says, 3DPrintTech can be setup for any common or custom 3D printer and is currently compatible with Autodesk Inventor 2014, AutoCAD 2014 and SolidWorks 2013. Future versions will open support for other CAD applications including Revit, Rhino, Creo and NX, among others. 3DPrintTech is available as a free download from CCTech’s web site.
http://labs.cctech.co.in/3dprinttech