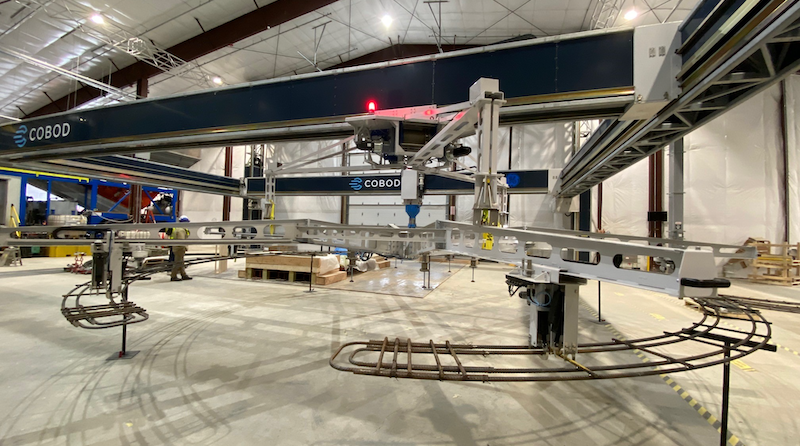 GE Renewable Energy announced the opening of a facility to research how to 3D print the concrete base of towers used in wind turbines. Additively manufacturing the bottom portion of the wind turbine towers on-site will lower transportation costs, the company says.

According to the company, traditional steel or precast concrete turbine bases are typically limited to a height of under 100 meters, as the width of the base cannot exceed the 4.5-meter diameter that can be transported by road, without excessive additional costs. Additively manufacturing a variable height base directly on-site, with 3D-printed concrete technology, will enable the construction of towers up to 150 to 200 meters tall.

The research conducted at the Bergen, NY facility will also enable GE to better serve the growing US wind power market, the company says. According to the American Clean Power Association (ACPA), there are more than 68,000 wind turbines across the U.S. generating 135 GW, making it the fourth-largest source of electricity in the country. GE Renewable Energy was the top manufacturer of wind turbines in the US in 2021.

GE says a team of 20 people will work on optimizing the 3D printing technology with first applications in the field anticipated within the next five years. The research being conducted at the Bergen facility is supported, in part, by a grant from the US Department of Energy.

“Reaching the Biden administration’s ambitious goals of carbon free electricity by 2035 and a net-zero economy by 2050 will require vastly more wind energy capacity. We’re proud to partner with GE Renewable Energy on this innovative 3D printing technology which has the potential to be a game changer in how we harness this resource,” said U.S. Department of Energy Deputy Assistant Secretary for Renewable Power, Alejandro Moreno, at the facility’s ribbon cutting ceremony. “With American-made taller towers assembled on site we can cut costs, overcome logistical hurdles, and accelerate progress toward our goals.”
www.ge.com/renewableenergy