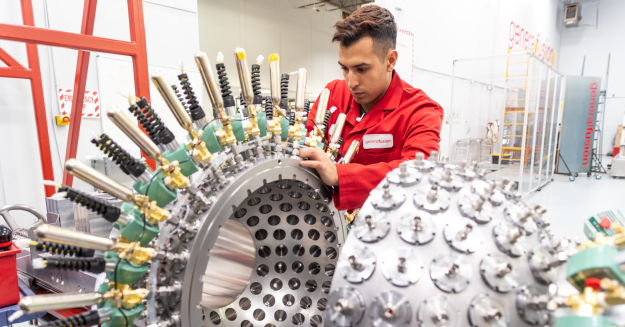 In the design of its fusion reactor, B.C.-based General Fusion employs pistons surrounding a spherical compression chamber like the one pictured. (Photo credit: General Fusion)

General Fusion announced it has expanded its operations with the opening of a U.S. headquarters in Oak Ridge, Tennessee. For the past 20 years, the Burnaby, B.C.-based company has been developing a Magnetized Target Fusion (MTF) reactor that it hopes will produce net positive energy by the early 2030s.

The company says the Tennessee office is strategically located near the Oak Ridge National Laboratory (ORNL) – the largest multi-purpose science and energy laboratory in the United States and home to the U.S. ITER fusion reactor program. The proximity will allow it to collaborate with world-leading fusion scientists and engineering talent. The Oak Ridge office will also provide an ecosystem of fusion energy suppliers and services.

For example, General Fusion says it recently partnered with ORNL to study plasma diagnostics to improve the quality of the plasma used to create fusion, work that will advance the design and operation of General Fusion’s commercial machine.

“General Fusion has been a valued research partner as we advance plasma diagnostics to establish fusion energy as a viable source of abundant clean energy,” said Thomas Zacharia, Director of Oak Ridge National Laboratory. “We are thrilled to welcome its U.S. headquarters to the Oak Ridge Corridor. The arrival of this world leader in fusion energy underscores the value of the private-public collaborations that drive technology development and deployment here.”
www.generalfusion.com