This year’s Hannover Messe in Germany, staged under the keynote motto of "Efficiency, Innovation, Sustainability," attracted bookings from more than 4,800 exhibitors from 64 countries, matching the totals for the “boom year” of 2008.

Major travel limitations resulting from the international flight embargo impacted both exhibitor participation and visitor attendance, but Deutsche Messe was quick to launch a series of measures to ease the situation, chartering a fleet of buses to bring several hundred exhibitors from across Europe to the show.

From Turkey alone, some 150 exhibitors took the 50-hour ride. And from New Zealand, an exhibitor turned up after a 134-hour travel marathon! 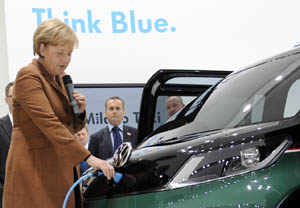 “Many hundreds of people demonstrated to us just how important it was for them to be at Hannover Messe,” von Fritsch remarked. The air travel ban did, however, prevent around 300 exhibitors from arriving in time to set up their stands, with exhibitors from Asia and the Americas most severely affected.

The closing of European airports put the brakes on international air travel to Hannover and Europe in general, which naturally had a negative impact on attendance. “Flight bans and several days of uncertainty did put a major dent in attendance on Monday, Tuesday and Wednesday, and we were not able to catch up by the end of the event,” von Fritsch explained.

Attendance from outside Germany was down by about half. The total visitor count of 150,000 was roughly 20% below the previous year’s figure. Attendance from Asia and North America suffered the most.

As expected in light of the flight bans, the majority of foreign visitors were from Germany’s neighboring countries. Attendance from the Netherlands was well up on the 2008 figure. The next largest contingents came from Austria, Denmark, France, Switzerland and Poland.

“The performance of Hannover Messe 2010 certainly cannot be gauged in terms of the visitor statistics. This year’s event will go down in history as the ‘volcano event,’” von Fritsch commented.

The President of the Federation of German Industries (BDI), Hans-Peter Keitel, agreed that the event had been a success overall. “The volcanic ash cloud paralyzed international air travel, but not Hannover Messe! To the contrary: The exhibitors, and in particular Deutsche Messe, were totally committed to making this Hannover Messe a success.

"This was absolutely crucial in light of the incipient economic recovery. The companies and industries who exhibited here now have wind in their sails for smoother sailing ahead, despite any navigational obstacles which might still be in the way.”

Some Canadians were affected by the flight ban, including one group of 20 scheduled to arrive during the show.