Because Supreme 10HT has demonstrated superior strength properties, it was selected for use in several research studies. 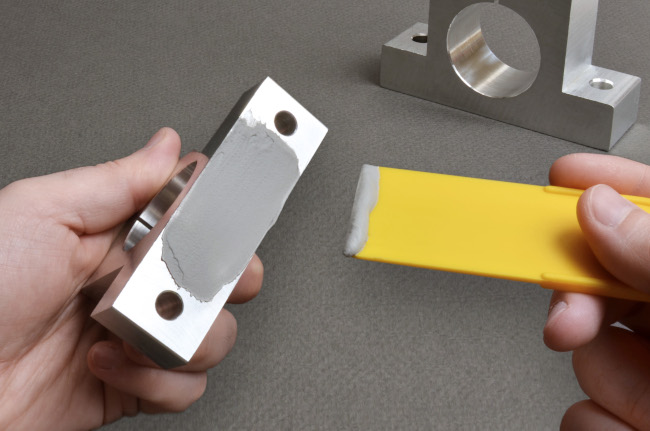 High Strength, Toughened Epoxy System Tested in Case Studies
Master Bond Supreme 10HT has demonstrated superior strength when used to bond surfaces under challenging conditions. It is a toughened system that is cryogenically serviceable from 4K to 400°F. It withstands mechanical and thermal shocks, meets NASA low outgassing specifications, and withstands 1,000 hours at 85°C/85% RH, with a Shore D hardness of 80. It has outstanding physical strength properties with tensile shear strengths exceeding 3,600 psi and T-peel strengths up to 30 pli. Because of its outstanding strength and other physical properties, Master Bond Supreme 10HT has been selected for use in several published research studies. Following are summaries of how Supreme 10HT performed in demanding applications outlined in these studies.

Adhesive for Electronic Control Components
The first case study involves an application for electronic control components, which perform logical and signal conditioning functions. A study conducted at L’École Polytechnique Fédérale de Lausanne (EPFL) in Lausanne, Switzerland, investigated alternative materials for use in high temperature control electronics packaging. Among the materials tested, were adhesives used for die-to-substrate assembly. Supreme 10HT was tested in this regard. Requirements for the die-to-substrate bond included reasonable bond strength and a suitable path for thermal dissipation. High temperature, and temperature cycling tests were conducted.

Adhesive for Capacitor Tank
The second case study involved an application for capacitor tanks. Capacitor tanks are commonly used in electrical power distribution systems to help maintain consistent line voltage levels. Because capacitor tanks– and in turn, the sealed joints between the capacitor bushings and metallic components– are commonly found at the top of utility poles and in electrical substations throughout the world, they are exposed to a myriad of environmental conditions Furthermore, these joints must be capable of maintaining such high performance over a period of approximately 30 years. Researchers at Cooper Technologies Company in Houston, Texas, ran performance tests on over a dozen commercially available epoxy resin products in an effort to identify compositions that may be used to seal capacitor tanks. Sup 10HT was one of over a dozen epoxies tested, and was one of four that exhibited sufficient strength for the application.

Aircraft Adhesive
Yet another application involved an adhesive joint for a supersonic aircraft. Supersonic aircrafts are subjected to temperatures as low as -55°C when traveling at subsonic speeds at high altitudes and temperatures of approximately 200°C when traveling at or above Mach 2. A research team from the University of Porto (Portugal) and the University of Bristol (UK) set out to investigate the possibility of designing a mixed-adhesive joint consisting of both a low-temperature adhesive and a high-temperature adhesive that would support the required load across the entire temperature range.


Related Stories
Stop Overdesigning: How to Save Time and Money with a Light-Duty Retaining Ring