Hong Kong University’s Super Steel Project announced that work on its super D&P steel has resulted in enhancing the alloy’s fracture resistance and ductility while maintaining its superior strength.

“In this latest breakthrough in super D&P steel, we attained an unprecedented strength-toughness combination which can address a major challenge in safety-critical industrial applications – to attain an ultra-high fracture toughness so as to prevent catastrophic premature fracture of structural materials,” said Professor Huang.

When it comes to steel, material scientists typically have to trade off one desirable quality for another. Making steel resistant to deformation (i.e. strong), for instance, typically makes it more brittle and/or less flexible. However, Professor Huang says his team, working in conjunction with Professor Robert O. Ritchie’s research team at the Lawrence Berkeley National Lab (LBNL) and UC Berkeley, has devised a method of preserving all of steel alloy’s desirable qualities.

According to Huang, super D&P steel has a unique fracture property in that multiple micro-cracks are formed below the main fracture surface, through a novel “high-strength induced multi-delamination” toughening mechanism. These micro-cracks can effectively absorb energy from externally applied forces, resulting in the steel’s much higher toughness resistance compared to existing steels.

The result is a steel alloy with a yield strength resistance against deformation of ~2GPa, a fracture toughness of 102MPa · m1/2 and a uniform elongation of 19%. In comparison, the high strength steel in bridge cables has a yield strength lower than 1.7 GPa ~ and a fracture toughness lower than 65 MPa · m1/2, similar to the steel used in armoured cars. While the steel in a piano wire is stronger (2.6 to 2.9 GPa) to resist deformation and keep the instrument in tune, it’s also very brittle. 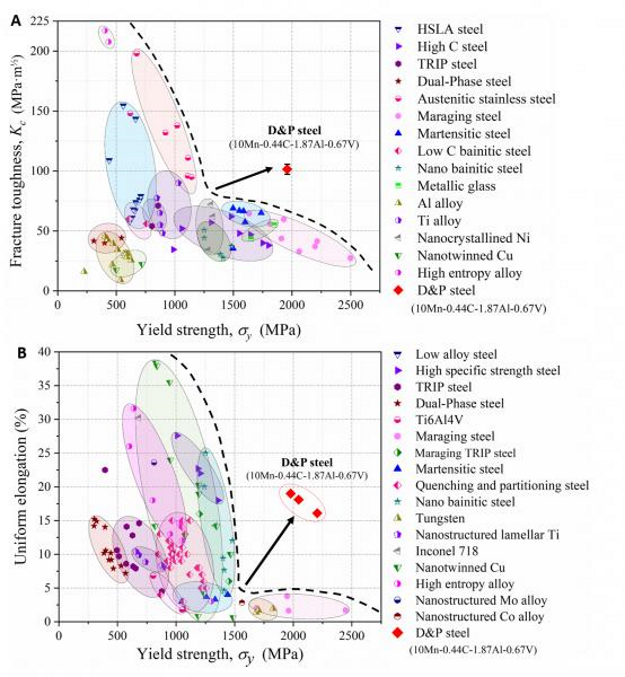 In addition, he says the cost of raw materials to make the team’s D&P steel is only 20% of the grade 300 maraging steel currently used in aerospace, which has a yield strength of 1.8 GPa and fracture initiation toughness of 70 MPa · m1/2.

“D&P steel has other advantages such as simple industrial processing and low raw-materials cost,” said Li Liu, a PhD student supervised by Professor Huang. “It can be produced by conventional rolling and annealing processes. As such, no complex fabrication routes and special equipment are required,”

In addition to applying for patents in US, EU and China, the team said it is currently working with industrial partners to generate prototypes of high-strength bridge cable, bullet proof vest and a car spring to run further tests. Further details on D&P steel structure and production method appeared in a paper titled Making Ultrastrong Steel Tough by Grain-Boundary Delamination published in the journal Science.
www.hku.hk