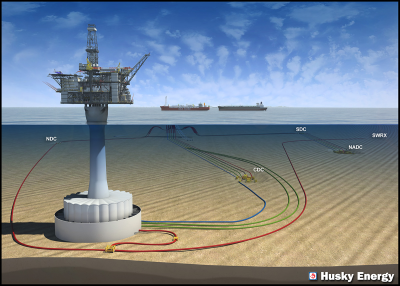 The Calgary-based oil and gas producer said Wednesday it is putting the project – and by extension all of its investments in the region – under review as it deals with a one-year construction delay it implemented in March amid low oil prices linked to the COVID-19 pandemic.

“We are asking the government to consider a direct investment in the project, similar to Hibernia,” said Husky spokeswoman Kim Guttormson in an email response to The Canadian Press. “This isn’t a handout or a loan, it’s an investment that would provide a return to taxpayers.”

The Hibernia offshore project led by ExxonMobil Canada is 8.5 per cent owned by the federal government.

The statement confirms speculation by analyst Phil Skolnick of Eight Capital in a report on Wednesday that the review announcement could be interpreted as a call for the province to inject money to ensure West White Rose is built.

He also suggested that under a “worst-case scenario,” it could also signal Husky’s option to eventually shut down or sell the currently producing White Rose offshore oil project itself.

“West White Rose is critical to the future of the existing White Rose field, which has been producing since 2005 and is in natural decline,” said Guttormson in response to the second point.

“There are no additional wells planned for the main field and, in the near term, the field will hit a point where it’s too costly to produce those fewer barrels. The West White Rose project is the catalyst for any further investment in the White Rose field and the SeaRose FPSO.”

The West White Rose project includes investing in projects that would allow the continued employment of the SeaRose floating production storage and offloading unit to serve the entire field.

If the new project doesn’t go ahead, it raises questions about whether those projects are worthwhile to preserve the 20,000 barrels per day Husky gets from its share of the existing project, Skolnick said, which could lead to a scenario where it attempts to sell or shuts down the project in 2022.

Newfoundland and Labrador is the third-largest oil producer in Canada and its offshore oil industry has been hit hard by crashing global oil prices.

In mid-March, Equinor and Husky announced an indefinite deferral of the Bay du Nord project, slated to be the province’s first deepwater operation.

Drilling on the Hibernia platform was suspended in April, as was a refit for the Terra Nova floating production storage and offloading vessel.

The Newfoundland and Labrador government has been imploring Ottawa to help the sector, even holding a news conference in late May to appeal for federal aid.

West White Rose is expected to produce up to 75,000 barrels of oil per day, with Husky collecting 52,500 bpd from its 69 per cent share. It is partnered on the project with Suncor Energy Inc. at 26 per cent and Nalcor Energy, the province’s Crown energy corporation, with a five per cent stake.

“A full review of scope, schedule and cost of this project is critical, given the minimum one-year delay to first oil caused by COVID-19, and our priority of maintaining the strength of our balance sheet with ample liquidity,” said Husky CEO Rob Peabody in a news release announcing the review Wednesday.

“Unfortunately, the delay caused by COVID-19 and continued market uncertainty leaves us no choice but to undertake a full review of the project and, by extension, our future operations in Atlantic Canada.”

The West White Rose project is about 60 per cent complete, with about $1.1 billion in work left to be done in Newfoundland and Labrador and an expected $11 billion in future capital and operating expenditures over its life, Husky said.

Peabody said it will result in “billions” in government taxes and other public benefits, adding: “We need to find a solution now.”

The White Rose field and satellite extensions are located in the Jeanne d’Arc Basin approximately 350 kilometres off the coast of Newfoundland.

West White Rose is expected to create about 250 full-time platform jobs and thousands of jobs during construction.

Due to the short offshore weather window needed for construction, the suspension in March meant that the project is delayed for at least a year.
https://huskyenergy.com
—————–

By Dan Healing in Calgary with a file from Sarah Smellie in St. John’s.