The U.S. Department of Energy has announced the closing of a US$528.7 million loan with Fisker Automotive for the development and production of two lines of plug-in hybrid electric vehicles (PHEV). The loan will support the Karma, a full-size, four-door sports sedan, and a line of family oriented models being developed under the company’s Project NINA program.

Fisker, a startup based in southern California, expects to manufacture the Karma and Project NINA lines at a recently shuttered General Motors factory in Wilmington, Delaware. Fisker anticipates that it will employ 2,000 American assembly workers. Industry experts expect that domestic parts suppliers and service providers also will increase employment substantially. 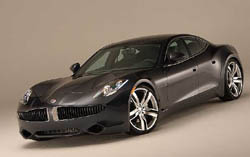 Fisker’s plug-in hybrid products will be among the first to market and will help to accelerate the introduction of fuel-saving electrified vehicles in the U.S. When full production is reached in 2015, Fisker estimates annual sales at up to 115,000 vehicles. Combining Fisker projected sales volume with the expected sales volume of the Nissan Leaf and the Tesla Model S, sales of electric and PHEVs funded with DOE ATVM loans could exceed 300,000 annually.

Initially, Fisker Automotive will use the proceeds of the loan for qualifying engineering integration costs as it works with primarily U.S. suppliers to incorporate components into the Karma’s design. The engineering integration work will be conducted in Irvine, California, where engineers will design tools and equipment and develop manufacturing processes. The Karma is scheduled to appear in showrooms in late 2010. The second stage will involve the purchase and retooling of the former GM plant to manufacture the Project NINA line of PHEVs, which is expected to begin rolling off the assembly line in late 2012.

Fisker automobiles are driven by electric motors that get their power from a rechargeable Lithium-ion battery, or, when that is depleted, by a generator driven by an efficient gas-powered engine. The Karma and Project NINA models will have an all-electric, tailpipe-emission-free range of 40 to 50 miles on a full charge, more than most Americans drive each day. The battery can be charged at home overnight. Using gas and electric power, Fisker plug-in hybrids are expected to have a cruising range of up to 300 miles.

“The story of Fisker is a story of ingenuity of an American company, a commitment to innovation by the U.S. government and the perseverance of the American auto industry,” said Vice President Joe Biden. “The Boxwood Plant is opening again, employing workers in Delaware, and is serving as a roadmap for all we can accomplish if everyone works together. Thanks to real dedication by this Administration, loans from the Department of Energy, the creativity of U.S. companies and the tenacity of great state partners like Delaware – we’re on our way to helping America’s auto industry reclaim its top position in the global market.”

“Not only will the Fisker projects contribute to cleaner air and reduced carbon emissions, these plug-in hybrid cars will help put American ingenuity at the forefront of automotive design and production,” said Secretary Chu. “And they will bring innovative cars to the market place while putting American workers back on the job,” Secretary Chu added.