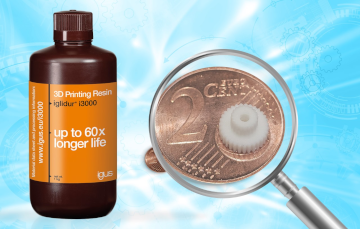 igus has introduced its iglide i3000 – the first 3D printing resin specifically for DLP 3D printing of wearing parts. According to the company, the material enables the additive manufacturing of small components with a service life that is 30 to 60 times longer than with conventional 3D printing resins.

“A common problem with tiny components made of commercially available 3D printing resins, such as gears for model-making, is that they are not particularly robust and fail quickly,” says Tom Krause, Head of Additive Manufacturing at igus. “We were able to prove in laboratory tests that the service life of iglide i3000 is at least 30 times longer than 10 tested commercially 3D printing resins. In some applications, we even expect an increase in service life by a factor of 60.”

In addition to the 3D printing resin, the company says it is also expanding its 3D printing service to include DLP 3D printing, as well as SLS and FDM, that achieve a resolution of 0.035 millimeters.

“We are now entering the beta test phase with the first customers” said Krause. “At the same time, we are working on ensuring that DLP 3D printing is also available in the online tool, which customers can use to upload STEP files for their components or configure gears in just a few clicks.”
www.igus.com