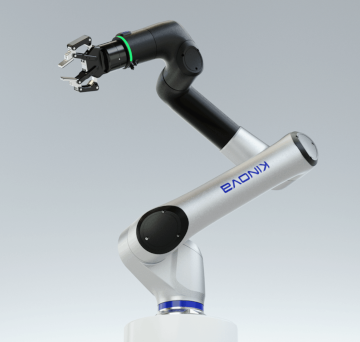 Like others on the market, the Link 6 is light for its size and capabilities (23.45kg / 51.7 lbs) and can be programmed or “taught” to perform basic moves by specifying a series of waypoints using the cobot’s wrist “push button” interface. For more complex operations, it can be programmed via a touchscreen teach pendent or a browser interface.

In addition to the arm, the Link 6 controller incorporates a Intel Core i7 processor, 8GB of DDR4 RAM and up to a 128 GB SSD to run ROS and Kortex platform software. The 17.6kg (38.8 lbs) controller can also be equipped with GPU to add AI capabilities.

The company also stresses the Link 6’s modular nature in that specific features can be integrated via software plug-ins and native support for several industrial grippers, most notably those from OnRobot and fellow Quebec-based robotics firm, Robotiq.

“Our operating market is mainly in the United States, where robotics innovation is well established,” explained Kinova founder and CEO, Charles Deguire. “With the launch of Link 6, we also aim lend a hand to the Canadian market. Collaborative robots such as Link 6 are an interesting and increasingly sought-after alternative to overcome the labor shortage, here and elsewhere.”
www.kinovarobotics.com