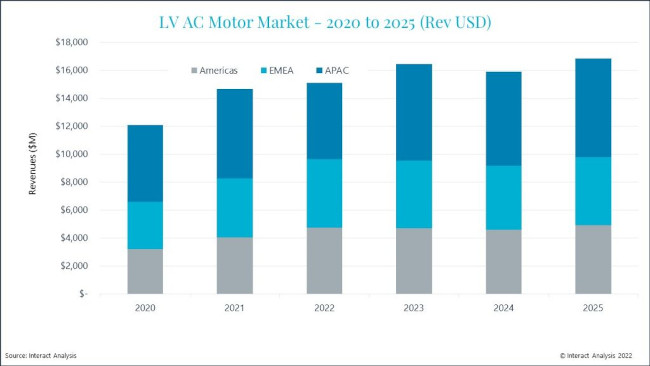 According to research from Interact Analysis, the low voltage motors market saw the highest revenue growth in living memory during 2021, driven by historic price increases as a result of supply chain disruptions. Disruptions have included shortages of key components and raw materials–with steel, copper and aluminum in particular reaching record highs in 2021–as well as major increases to shipping prices.

China continues to be the world’s largest motor market and, although ABB and Siemens continue to be global market leaders, domestic Chinese companies, including Wolong Electric and Wanan Motors are now entering the top ten global suppliers. During 2022, the market analysis firm says it expects to see Wolong hit the top spot in APAC, which will be a first for a Chinese supplier.

Increases in shipping rates have also created a significant problem for the LV motors market, Interact Analysis says. For example, container shortages caused rates to increased tenfold in 2021 and won’t return to normal anytime soon, if ever, the report states.

A combination of high demand and an increased number of truck drivers exiting the industry does not bode well for the market. The knock-on effect of this coupled with the rise in energy prices has caused an exponential rise in raw material costs. In particular, the report says steel prices have spiked for the foreseeable future, which is having a major impact on the price of motors.

“For me, one of the most interesting findings of this research is related to new high efficiency IE4 and IE5 motors,”, said Interact Analysis senior analyst at, Blake Griffin. “There is a lot of hype surrounding them, but the market has shown that it will generally not adopt them unless forced to by legislation. Currently, the IE4 & IE5 motor market is in its infancy with a market size of $134 m in 2020. But major growth is predicted in the European Union which is putting IE4 minimum efficiency performance standards in place.”
www.interactanalysis.com