Manufacturing sales fell 2 per cent in May, StatCan says

Lead by auto production, 11 of the 21 industries tracked experienced declines during the month. 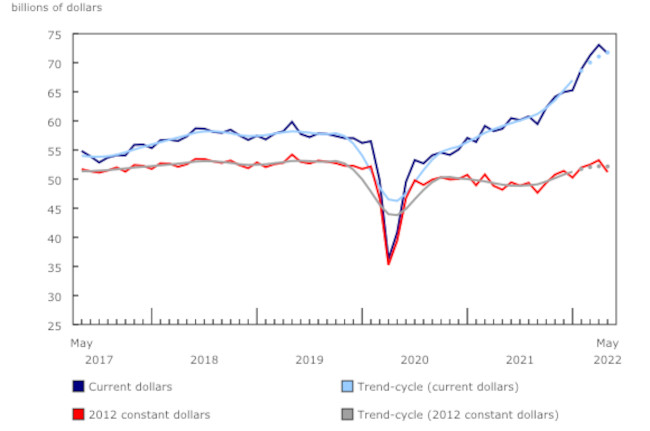 OTTAWA – Canadian manufacturing sales fell 2.0 per cent to $71.6 billion in May as auto production fell in the month, Statistics Canada said Thursday.

The agency said the first drop in manufacturing sales after seven consecutive months of gains came as sales fell in 11 of the 21 industries it tracks.

Transportation equipment sales were down 15.7 per cent in the month at $8.5 billion as sales in the motor vehicle industry fell 31.9 per cent to $3.3 billion in May due to retooling at auto assembly plants and semiconductor part shortages.

Despite the decline, motor vehicle sales were up 41.3 per cent compared with a year ago.

Primary metal sales fell 4.1 per cent to $6.3 billion for the month, but still posted the second highest sales on record after April.

Meanwhile, higher prices helped sales in the petroleum and coal industry rise 5.4 per cent to $10.9 billion in May, a new record.

Sales of machinery also reached a record high in May as they rose 3.3 per cent to $4.0 billion.

In constant dollar terms, overall sales fell 3.9 per cent in May, indicating a lower overall volume of sales.

Nikita Perevalov, director of economic forecasting at Scotiabank, said while the decline in Canadian manufacturing sales in May was not a surprise, the magnitude of the fall was larger than expected once the effects of price increases were stripped out.

“Overall, this morning’s print does little to assuage concerns around economic activity in the short term,” Perevalov wrote in a report.

The reading for manufacturing sales comes after Statistics Canada said last month that its preliminary estimate for real gross domestic product pointed to a contraction of 0.7 per cent in May.

The Bank of Canada raised its key interest rate by a full percentage point on Wednesday to 2.5 per cent in a bid to help bring inflation back under control.
www.statcan.gc.ca