Why Bézier Curves Matter – The Style Spline in SOLIDWORKS

In Part 1 of this series we looked at how the Style Spline (Bézier curve) differs from the B-Spline and other curves that were already available in SOLIDWORKS prior to 2014.

Here are the main points as to why this kind of curve is useful to a CAD user:

Control
The only way to control a Bézier curve is by manipulating (dragging) its control vertices (CVs). Right now it’s the only way to even sketch the curve in SOLIDWORKS, by placing a series of points. To make the CVs more useful when it comes to shaping or constraining the curve, construction lines are added in between each CV during curve creation. Therefore, controlling this curve is as simple as controlling a series of lines. This is something with which every SOLIDWORKS user is familiar. Users can drag a CV in any direction to change the shape of the curve, or you can drag a construction line to drag two CVs at once. And since the curve is basically controlled by lines, it can be mirrored, which makes shaping either the seed or the mirrored instance very easy to do. 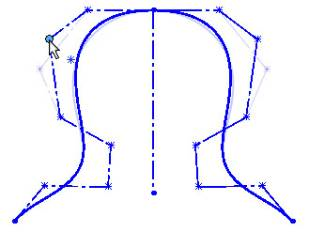 Also, this curve can be symmetric on itself by simply applying symmetric relations to the CVs around a center line. This is much harder to do with a B-Spline. While you can make the through points symmetric to each other, you cannot do the same with the spline handles (they must each be fully dimensioned and/or constrained individually if you want perfect symmetry).

Constraining the curve is very simple because, again, it’s as easy as locking down a bunch of points and lines. Dimensions and relations may also help in shaping the curve, and makes it possible to configure and control the shape with equations. 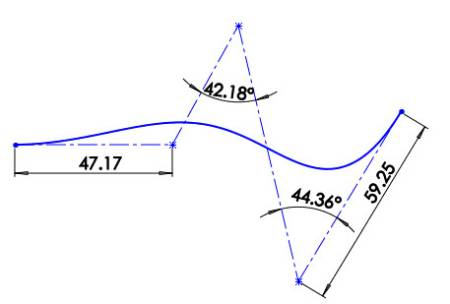 The B-Spline, on the other hand, has a few extra controls to help shape the curve. These controls are very powerful, and can help the B-Spline quickly achieve some very complex shapes with much sharper changes in curvature. However, these controls can sometimes be the downfall of the curve. Spline handles are very useful, but they’re not natural to the curve. They are something that most systems implement to help users shape the curve, however there is some serious number crunching going on the in the background. Once you begin pulling on handles at different points of the curve, it’s adding more degrees of freedom to the curve. It can become awkward quickly, since there’s a lot of math going on to honor all the tangent weights and vectors and keep all of the spans flowing smoothly from one to the next. Although it’s a great way to quickly achieve a shape, it can sometimes lead to undesirable or confusing behavior, or make the curve difficult to constrain.

The B-Spline also has the ability to be shaped by its control polygon as well (RMB on the spline > Display Control Polygon), but this is something that cannot be referenced. This means you cannot constrain the polygon sides or CVs in any way like you can with the Style Spline, so you’re strictly eyeballing it.

Continuity
Shaping the Style Spline is very intuitive and easy to do. One difference from that of a B-Spline is that adjusting the CV locations to shape the curve is not as local, meaning that each CV has a wider influence over the entire curve on a Bézier curve. This is why a B-Spline is better suited for creating tight curves. However, one area where the B-Spline can fall short is maintaining continuity. As you shape a B-Spline, especially if you are using spline handles, curvature continuity across each through point can become interrupted. If a smooth curve is important to you, and your shape is not very complex (i.e. rapidly changing or alternating curvature, tight turns), then the Style Spline is the way to go. Something you can try yourself would be to create the same shape using each type of curve and the available controls. Once you’re finished, turn on the curvature combs (RMB on the spline > Show Curvature Combs or Show Curvature in the PropertyManager) and inspect the curves. Then, attempt to further shape each curve and note the result on the curvature combs. 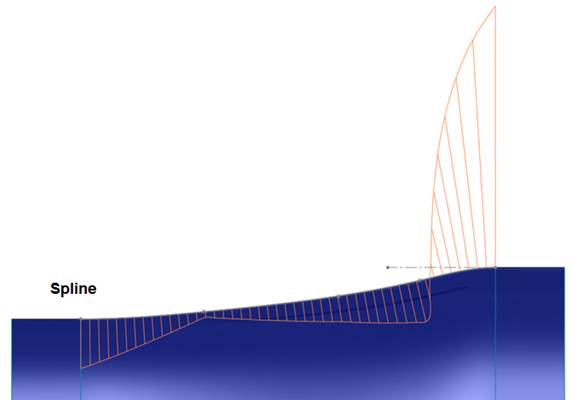 The curvature of the Style Spline will always be more smooth and continuous. Actually, it’s pretty hard to get any abrupt change in curvature on a Bézier curve. 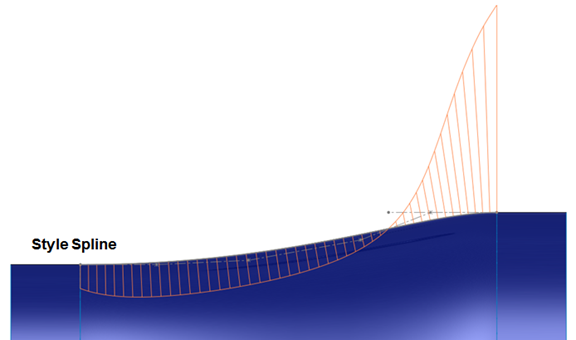 Quality
Finally, another reason why the Style Spline curve might be better suited for the job is due to quality. As mentioned previously, the math is easier, the degrees of freedom are simpler and more transparent, and constraining it is fast and easy. It has the potential to be less prone to problems. If a B-Spline was used to create geometry that isn’t too complex, you may end up paying the price due to the fact that there are probably more degrees of freedom in the curve than are necessary to get the desired shape. Therefore, you may end up in a situation where the curve is prone to those previously mentioned inflections or wrinkles, when upstream changes are made.

This is why a Bézier curve makes a great bridge curve in most situations. An example of this is when you have two open-ended pieces of geometry that need to be connected or bridged with a smooth blend. Also, since there aren’t handle weights or angles to worry about, it’s easier on the solver.

Todd Domke is the Hawk Ridge Systems Product Manager for SolidWorks 3D CAD, and holds a number of certifications, including Certified SolidWorks Expert.