Merchandise trade surplus fell to $1.5B in August, StatsCan says 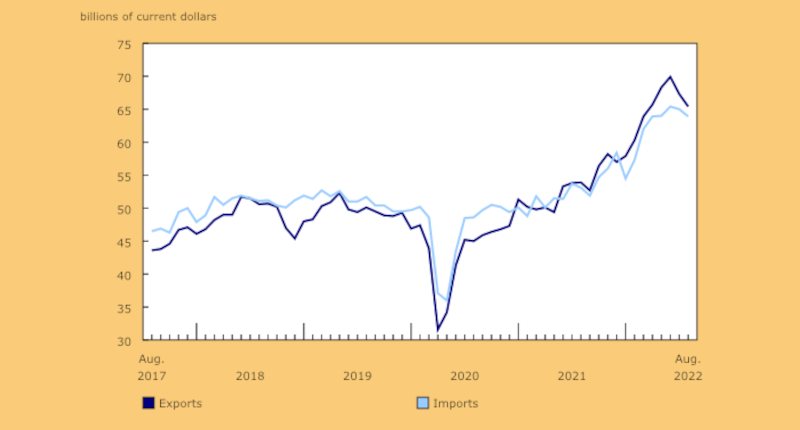 OTTAWA – Canada’s merchandise trade surplus was $1.5 billion in August, the smallest monthly surplus for the year so far.

Statistics Canada said that August’s result compared with a revised surplus of $2.4 billion for July, down from an initial reading for the month that showed a surplus of $4.1 billion.

Statistics Canada said total exports fell 2.9 per cent to $65.4 billion in August as they moved lower for a second consecutive month.

Exports of energy products fell six per cent to $18.4 billion as exports of crude oil fell 5.7 per cent, largely due to lower prices.

Imports of motor vehicles and parts were down 7.1 per cent in August as imports of passenger cars and light trucks fell 9.5 per cent and imports of engines and parts moved down 7.4 per cent.

In volume terms, exports fell 1.3 per cent in August, while imports dropped 0.7 per cent.

“With two months in hand, it still looks like trade will add to third quarter growth; however, the monthly data is subject to significant revisions that could change the magnitude of the support,” BMO economist Shelly Kaushik wrote in a report.

Regionally, Statistics Canada said the trade surplus with the United States was essentially unchanged at $10.7 billion in August as exports to the U.S. fell 2.5 per cent and imports from Canada’s largest partner dropped 3.3 per cent.

Canada’s trade deficit with countries other than the United States was $9.2 billion in August compared with a deficit of $8.3 billion in July, the first increase in four months.

In a separate report, Statistics Canada said Canada’s international trade in services deficit for August increased to $1.9 billion compared with a deficit of $1.6 billion in July as imports of services rose 2.1 per cent to $14.5 billion and exports gained 0.3 per cent at $12.6 billion.

Combined, Canada’s trade balance with the world including goods and services fell to a deficit of $369 million in August, the first deficit for the year, compared with a surplus of $740 million in July.
www.statcan.gc.ca