Researchers at MIT announced the development of a robotic system that can build large complex structures from a series of small, Lego block-like pieces. Dubbed BILL-E (Bipedal Isotropic Lattice Locomoting Explorer), the robots resemble a small arm, with a clamping end-effector on either end and an elbow in the middle. As the small machines build 2D or 3D structures in modular fashion, the uniform latticed blocks provide hand holds for the robots to move along like earthworms while also providing a way for the robots to measure and orient themselves in space.

The robotic system, created by MIT graduate student Benjamin Jenett, working with Professor Neil Gershenfeld in MIT’s Center for Bits and Atoms (CBA), has been pursuing the project as his doctoral thesis work. Currently in the prototype stage, the BILL-E robots can assemble small structures alone or work together to build up a larger assemblies.

Similar to a digital picture composed of screen pixels, the MIT system builds structures by interconnecting three-dimensional objects made up of struts and nodes or voxels. Largely made up of open space, these voxel components are light-weight but are also able to distribute loads efficiently, the researchers say.

Jenett says he has built several versions of the assemblers, along with corresponding voxel designs featuring latching mechanisms to attach or detach each one from its neighbors. He has used these prototypes to demonstrate the assembly of the blocks into linear, two-dimensional, and three-dimensional structures.

“We’re not putting the precision in the robot; the precision comes from the structure,” Jenett says. “That’s different from all other robots. It just needs to know where its next step is.”

As it works on assembling the pieces, each of the tiny robots can count its steps over the structure, says Gershenfeld. Along with navigation, this lets the robots correct errors at each step, eliminating most of the complexity of typical robotic systems, he says.

The research team says the system has already attracted the interest from NASA, MIT’s collaborator on BILL-E project, and Airbus SE, which also helped to sponsor the study. Such systems, the MIT researchers say, could be used to construct entire buildings in space, or on the moon or Mars, eliminating the need to ship large preassembled structures from Earth.

“For a space station or a lunar habitat, these robots would live on the structure, continuously maintaining and repairing it,” Jenett says.

The new work appears in the October issue of the IEEE Robotics and Automation Letters, in a paper by Jenett, Gershenfeld, fellow graduate student Amira Abdel-Rahman, and CBA alumnus Kenneth Cheung SM ’07, PhD ’12, who is now at NASA’s Ames Research Center, where he leads the ARMADAS project to design a lunar base that could be built with robotic assembly.
www.mit.edu 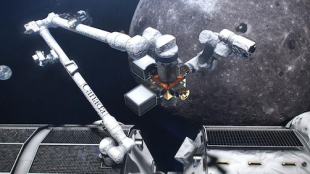