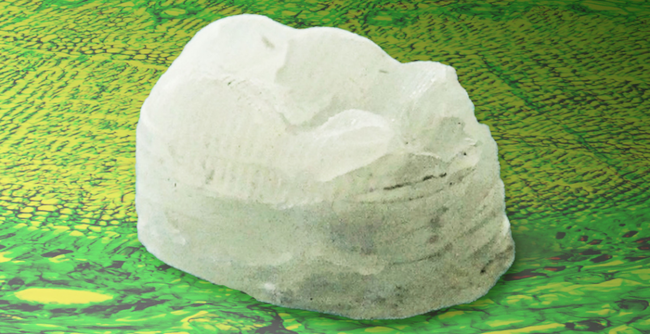 A cellulose-based composite, engineered by a team at MIT.
(Photo credit: A. John Hart, Abhinav Rao; edited by MIT News.)

A team of researchers at MIT announced they’ve engineered a plant-derived composite composed of 60 to 90 percent cellulose nanocrystals (CNC)– organic polymers arranged in crystal patterns – mixed with synthetic polymer. The resulting material, they say, is as tough as some kind of bone and as hard as aluminum alloy.

The team created the material by mixing synthetic polymer with commercially available CNC powder at a ratio that would result in a gel. Using an ultrasonic probe, the team disperse cellulose clumps so that it could form strong bonds with polymer molecules.

The gel was then fed through the nozzle of a 3D printer or poured into a mold to be cast. As the samples dried, the material shrank to form a solid composite composed mainly of cellulose nanocrystals.

Examining the composite under a microscope, the team discovered that the cellulose grains had settled into a brick-and-mortar pattern that resists crack formation, similar to nacre that lines mollusk shells. Under testing, the team reported that the composite – made of 63% CNCs by weight – exhibited a hardness of 0.66 GPa and a fracture toughness of 5.2 MPa · m1/2, a value comparable to aluminum alloys.

The MIT researchers say the next step will be to reduce shrinkage in the gel formulations, as this could cause the material to crack in larger parts as the composite dries. The hope is that the new material may be a viable substitute for many petroleum-based plastics.