Space agency and Made in Space partner to validate additive manufacturing tech in zero-gravity environment. 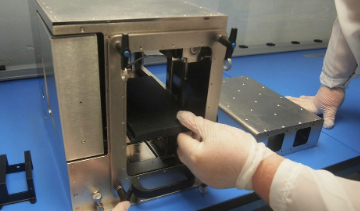 Made in Space has partnered with NASA MSFC to put the first 3D printer in space.

NASA announced that it intends to launch a 3D printer into space to test additive manufacturing techniques in zero gravity. The space agency will partner with NASA Research Park start-up, Made in Space, to see if the company’s purpose-built 3D printer could some day allow astronauts to fabricate parts and potentially structures off-world, rather than shipping them from Earth.

“As NASA ventures further into space, whether redirecting an asteroid or sending humans to Mars, we’ll need transformative technology to reduce cargo weight and volume,” NASA Administrator Charles Bolden said during a recent tour of the agency’s Ames Research Center at Moffett Field, Calif. “In the future, perhaps astronauts will be able to print the tools or components they need while in space.”

The Made in Space and NASA team envisions a future where space missions can be virtually self-sufficient and manufacture most of what they need in space. This includes such things as consumables, common tools, and replacements for lost or broken parts and eventually even such things as CubeSats (small, deployable satellites).

The hardware is scheduled to be certified and ready for launch to the International Space Station in 2014. In preparation, Made in Space tested an array of 3D printing technologies in zero-gravity in 2011 and is conducting additional tests this year. These microgravity tests provide the initial research that fed into the developments for the 3D Print experiment.

According to the company, its 3D printer is built specifically to handle the environmental challenges of space and uses extrusion additive manufacturing, which builds objects layer by layer out of polymers and other materials.

The primary goal of the experiment is to serve as a technology demonstration to verify the data collected from multiple parabolic flights that 3D printed parts in microgravity are equitable to earth-based parts. For this mission, Made in Space was awarded a Phase III Small Business Innovation and Research Contract.
www.madeinspace.us
www.msfc.nasa.gov