National Instruments and SolidWorks collaborate on a virtual prototyping solution

AUSTIN, Texas, and CONCORD, Mass. - August, 2009 - National Instruments and Dassault Syst√É¬®mes SolidWorks Corp. have announced their collaboration on a pioneer mechatronics tool that helps mechanical and control engineers work together to lower the cost and risk of motion system design.

Seamlessly connecting NI LabVIEW graphical system design software and SolidWorks 3D CAD software, the new virtual prototyping solution helps engineers and scientists design, optimize, validate and visualize the real-world performance of machines and motion systems before incurring the costs of physical prototypes. Because LabVIEW is used for controlling the virtual prototype, engineers and scientists can deploy their graphical software to physical NI hardware with little to no change to the code.

“The increasing complexity of machine designs demands better collaboration between different engineering disciplines including mechanical, electrical and control,” said Jeff Ray, CEO of DS SolidWorks. “SolidWorks and National Instruments have developed a prototyping solution that dramatically shortens the gap between idea and reality.” 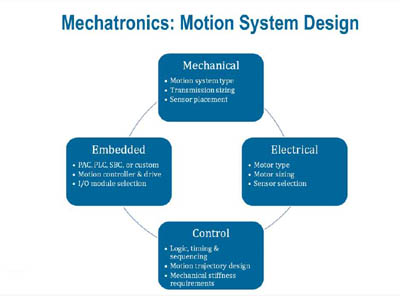 Mechatronics-oriented design tools improve machine development by simulating the interaction between mechanical and electrical subsystems throughout the design process. Historically, teams of engineers from different disciplines worked in silos and in sequential development. Design decisions were made independently, resulting in longer development times and higher costs. Now, to streamline development in a mechatronics approach, the teams work in parallel and collaborate on design, prototyping and deployment. The ability to create virtual prototypes is a critical aspect of the mechatronics approach because it helps engineers and scientists explore machines before they are built.

“We live in a multi-domain world, so designers should have access to best-of-class tools in each domain,” said Dr. James Truchard, president, CEO and cofounder of National Instruments. “By combining two of the most powerful design tools, LabVIEW and SolidWorks, we are giving engineers and scientists a new way to collaborate more effectively and innovate more quickly.”

The seamless integration of the LabVIEW 2009 NI SoftMotion Module and SolidWorks software delivers a design environment that is ideal for virtual prototyping. Existing SolidWorks CAD models can be easily connected to LabVIEW, which automatically links the motor actuators and position sensors defined in the model. Using the high-level functions provided by the NI SoftMotion for SolidWorks, engineers and scientists can develop sophisticated motion control applications that include logic based on sensor feedback. Design teams, customers and sales engineers then can use the virtual prototype to visualize realistic machine operations and analyze cycle time performance. By using LabVIEW and SolidWorks, the mechanical dynamics of a machine, including mass and friction effects, as well as motor and mechanical actuator torque requirements, can be simulated before parts are specified.

"The SolidWorks and LabVIEW connection gives our R&D teams the ability to develop a virtual prototype in advance of a physical build," said Dr. John White, chief engineer at NCR Corporation. "LabVIEW controls the motion trajectories while SolidWorks can be used to calculate the driving forces, power requirements and stresses. Together, these two development tools provide our engineers with the data needed for full design analysis and optimization."
The new virtual prototyping solution also makes it easy to deploy motion applications, validated using the SolidWorks 3D CAD environment, to NI embedded control platforms such as the NI CompactRIO programmable automation controller (PAC). Because the application was developed in LabVIEW, the same code used to create the virtual prototype can be deployed to physical NI hardware with little to no programming changes. Additionally, engineers and scientists can use the new NI 951x C Series drive interfaces to achieve direct connectivity to hundreds of stepper and servo drives and motors from NI and third-party vendors.

Readers can visit www.ni.com/digitalprototyping to learn more about the tools available for virtual prototyping.