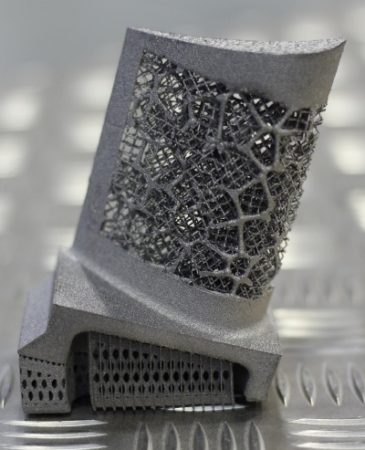 Material science engineers at the University of Sheffield and Imperial College London announced that they’ve developed a technique to fill additively manufactured parts with a unique lattice pattern that shows greater damage tolerance.

While it’s common for 3D printed parts to have a latticed instead of solid interior spaces, to save weight and build material, those patterns are typically uniform, with struts connecting nodes following common planes.

In fact, the Sheffield engineers say those patterns mirror the structure of metallic single crystal materials, with atoms and atomic bonds in place of nodes and struts.

While such materials perform well at extreme temperatures, they are susceptible to catastrophic shear forces, along one or more of the planes of nodes, when compression becomes strong enough to cause permanent deformation.

To combat that weakness, the researchers created a lattice pattern that mimics that of polycrystalline materials in which the alignment of the atomic planes is random. With this pattern, cracks caused by shear forces in one direction tend to slow down or stop when they meet nodes and struts aligned in a different direction.

In addition, the researchers say it’s also possible to introduce different materials in the build to strengthen the materials and inhibit crack propagation.

According the material engineers, experimental testing of parts printed with these meta-crystal type lattices shows they are highly energy absorbant and were able to withstand almost seven times the energy before failure than the lattice structures that mimic the single-crystal structure.

“This approach to materials development has potentially far-reaching implications for the additive manufacturing sector,” said Professor Iain Todd of The University of Sheffield. ‟The fusion of physical metallurgy with architected meta-materials will allow engineers to create damage-tolerant architectured materials with desired strength and toughness, while also improving the performance of architectured materials in response to external loads. And while these materials can be used as standalone structures, they can also be infiltrated with other materials in order to create composites for a wide variety of applications.”
www.shef.ac.uk