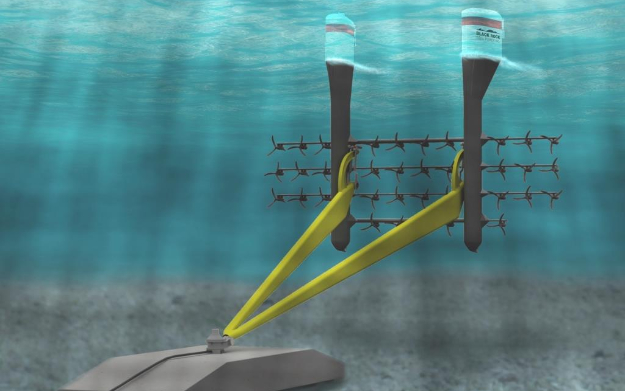 Halifax-based Black Rock Tidal Power’s semi-submerged TRITON platform is composed of 36 SCHOTTEL STG tidal turbines and is rated to produce 2.5MW of electrical power in high tidal flow velocities. Electricity produced by the individual turbines is collected and conditioned in a electrical room located inside the platform system. The company is partnering with European and Canadian firms, including Schottel of Germany; Tidal Stream of the United Kingdom; and Atlantic Towing, Allswater, Clearwater, Akoostix, Dynamic System Analysis; and Seaforth Engineering of Nova Scotia. 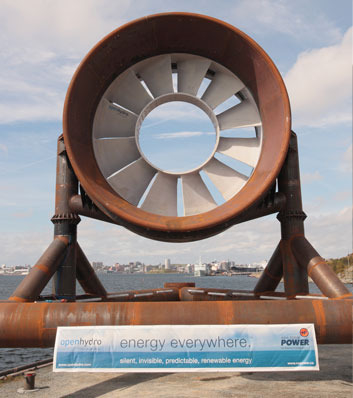 Irish start-up OpenHydro–with its parent company DCNS Group of France and Maritime companies Emera, Atlantic Towing, Irving Shipbuilding and Irving Equipment — was the first technology installed in the Bay of Fundy. The company’s Open-Centre Turbine features a shrouded, slow-moving rotor, designed to be deployed directly on the seabed.

In addition, the Canadian government and the province of Nova Scotia announced more than $4 million in funding to increase the electrical capacity up to 20 MW of connection at the research center. The facility say its will allow for the next level of device deployments, including small arrays, to connect to the electricity grid.

Nova Scotia’s tidal energy market has advanced in recent months, including a new provincial feed-in tariff, a tidal research memorandum of understanding with the United Kingdom, and successfully deploying a sub-sea cable. The first devices are expected to be in place in 2015.
http://fundyforce.ca