A 3D printed you
COVID-19 UPDATES:

A 3D printed you

An inside look at the 3D printed “selfies” and the Canadian-made photogrammetry booth that makes it all happen. 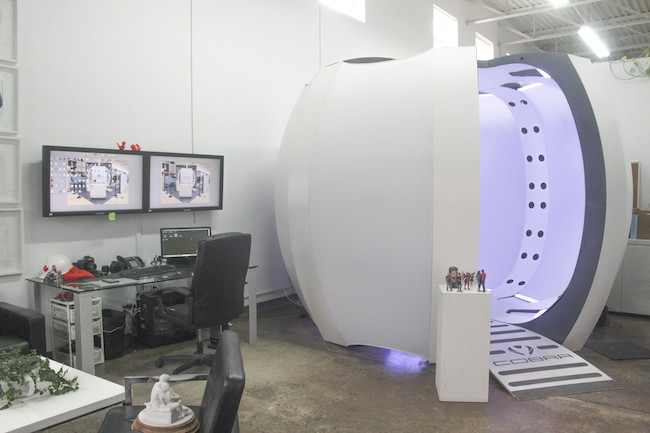 The inside of Objex Unlimited, an Etobicoke-based 3D printing service bureau founded by Steve Cory in 2011, hosts a unique managerie along its shelves and counters: Foot-high, life-like, 3D-printed figurines that capture customers in any pose they want, wearing wacky t-shirts, surprise proposals and even an English-bulldog dressed in a hotdog costume. While Objex mainly deals in additive manufacturing for industrial applications, art commissions and other projects, the company’s Selftraits division also offers the 21st Century version of the traditional photo studio.

“You can do whatever crazy stuff that you want to do; we won’t restrict you,” Cory says. “It was really important to us that we never tell the customer they can’t strike a certain pose or bring in their dog just because it might make it harder on us to create the model.”

The process of creating these 3D selfies begins with a technique called photogrammetry, in which 100+ of photos are digitally “stitched” together to create a 3D mesh model. To capture those images, Selftraits employs the “Cobra”, a large tomato-shaped pod, or 360-degree photo booth, inside which clients strike a pose. Following a short countdown, the Cobra’s 128 cameras fire simultaneously, capturing photos of the subject from all angles and multiple levels.

While the Cobra works efficiently now, and the company has even begun selling the machines to operators in Times Square and other tourist locations, the development of the Cobra required several trail and error iterations, the Objex team says.

“Our very first one was more or less just an extrusion frame with straight pillars,” says Brent Vanderwoude, an Objex designer who, along with Joe Kiez and Junior Kane helped build every the Selftraits booth. “We started with ABS piping from Home Depot and connecting different Nikons we had at the office with 3D printed mounts we made in-house,” said Vanderwoude. 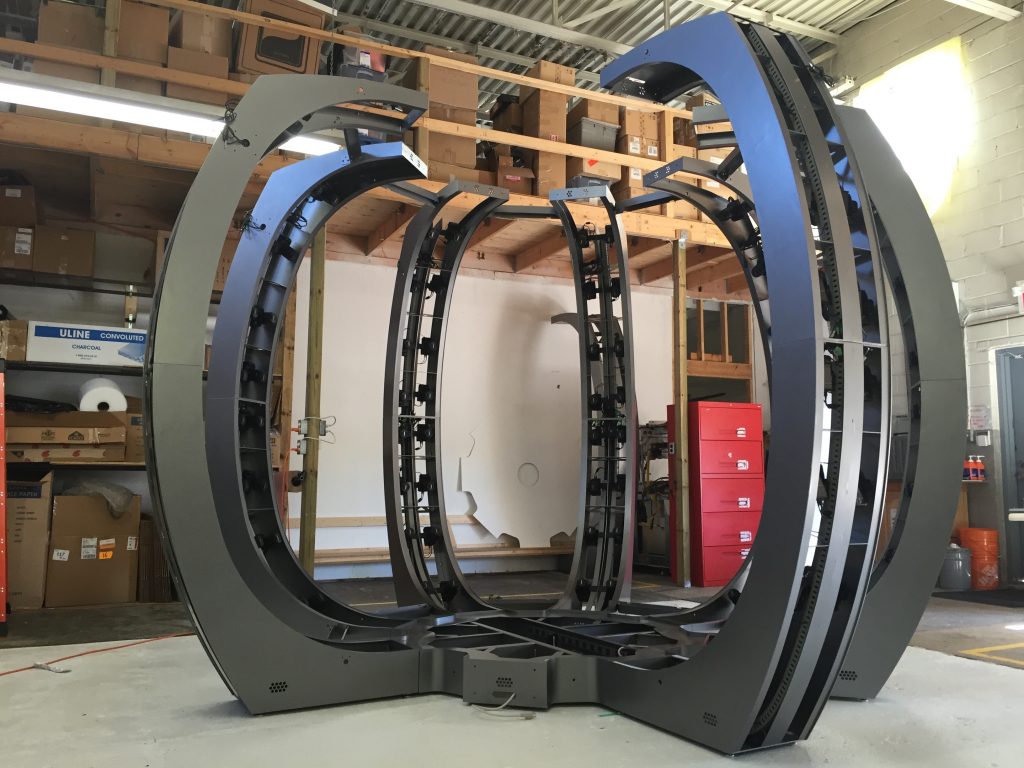 Here, the proof of concept Cobra is being built. Photo courtesy of Objex Unlimited.

In those days, he says the biggest challenge with the Selftraits booth was the construction itself. Previously, the booth featured straight walls with a curved fabric shroud to diffuse light. But the lighting was inconsistent, making the colour in the figurines (especially skin tones) harder to reproduce accurately.

To help refine the Cobra, Objex partnered with Toronto-based electrical design house NeuronicWorks. According to lthe engineering firm’s co-founder, Titu Botos, the NeuronicWorks/Objex team worked on four iterations of the booth together.

The first design focused on downloading data from the cameras to storage as quickly as possible. The second was streamlined and even portable but lacked the sophistication they were looking for. The third iteration was the opposite – bulky and hard to maneuver but used 140 cameras. The latest iteration has the best of both, Botos says

“The three generations were good but we wanted to keep the operational side fast while keeping it modular and easy to take apart while simultaneously working with a lot of cameras,” he says.

The Photohub V2 acts as the central repository for the camera data.

In part, the key to that breakthrough was a sophisticated controller system developed by NeuronicWorks. Since each of the Cobra’s eight ribs holds 16 cameras, the team needed a way to configure, control and “click” all of them in unison. In addition, the large high-resolution images need to be downloaded to a central repository housed beneath the Cobra’s platform. To do this, each rib integrates what NeuronicWorks calls the Photohub V2.

“It’s a specialized piece of equipment that’s meant to connect up to 16 cameras to an ethernet connection,” Botos says. “It’s a sophisticated interface working between the cameras and the Ethernet cables and computer.

In addition, software created NeuronicWorks (dubbed Cobra Control) acts as an interface for the entire ensemble. From a central computer, the software can set the shutter speed, exposure and focal lengths of every camera, as well as trigger the booth’s strobe “flash” lights so they are all fire simultaneously. The result is 128 individual photos ready to be process into a mesh by photogrammetry software.

For this, the Selftraits team employs Agisoft Metashape software that analyzes the photos and extracting data from them to create digital points in space. In the same way our eyes receive two slightly different images to triangulate distance and depth of field, photogrammetry works with pairs of slightly different photos.

The software “aligns” all the photos, providing a reference point of where the photos were taken and creating a sparse point cloud of a few thousand data points. Visually, the model looks unfinished with data points spread out and disconnected.

Agisoft mines the provided photos for more information (including colour) moving from a few thousand data points to a dense point cloud of millions. The software then creates a digital “mesh” stitching the data points together before applying the final texture. Think of the texture as wrapping paper being moulded to a gift being wrapped. It provides a final polished look to the original geometry of the model. 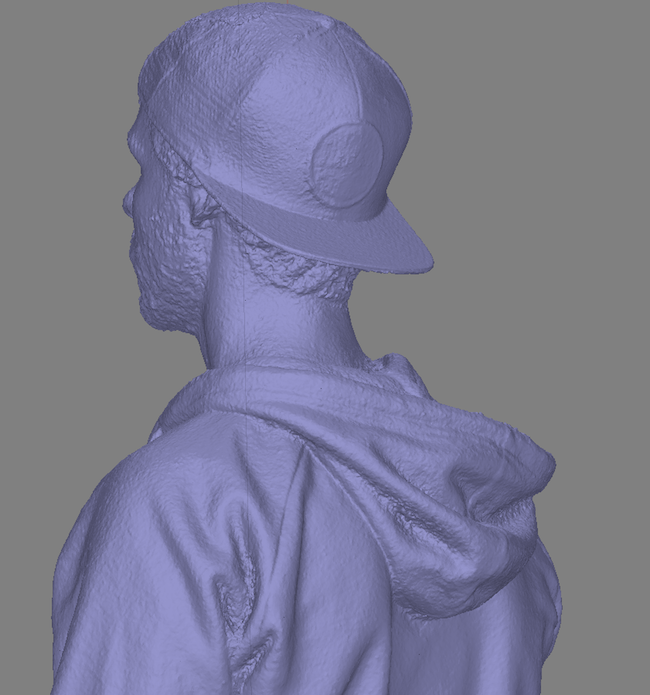 The rendered figurine is then imported into modelling software where digital sculptors on staff clean up any imperfections in the data, digitally sculpting under the arms and in any areas that require further detail work.

With the Selftraits digital model complete, it’s sent to Objex’s banks of 3D printers — a Projet 5500X, Projet MJP 2500 and Projet 3500 HDMax plus a few Markforged and MakerBot desktop 3D printers. These machines serve the service bureau’s industrial projects which constitute 60 per cent of Objex’ production output for clients like Treadwell & Co Design and waterslides manufacturer, Proslide. They also serve art and non-industrial projects (30 per cent) as well as medical devices and prosthetics for Sick Kids, Sunnybrook and Westpark hospitals (10 percent)

For Selftraits figurines, Objects uses two 3D Systems Projet 660 that prints full CMYK colour directly into the model. The 660colourjet technology is similar to inkjet printing but prints on thin layers of plaster powder instead of paper. The material is spread in thin layers over the build platform with a roller. After each layer is spread, colour binder is selectively jetted from inkjet print heads over the core layer, causing the core to solidify. The build platform lowers with every layer which is spread and printed, resulting in a full-colour three-dimensional model.

This is where Kate Haines—Objex’ full-time finishing artist for all projects, Selftraits related or otherwise—takes over.

“Our first stage is the extraction stage, actually getting the prints out of the printer itself,” Haines says. “It’s sort of like an archeology dig. You go in using the vacuum and the air tools to remove the excess powder around the model and anything else that might be clinging to the model itself.”

The figurines are then sanded down with a Dremel tool and tiny files. “We use those to get at the nooks and crannies, making sure that the colour is perfect so that everything matches the way it’s supposed to look,” she says. 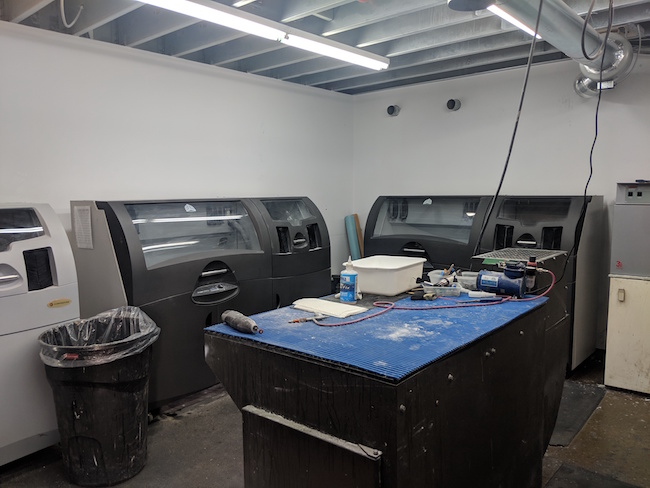 After that comes the infiltration stage, which Haines explains is, “A fancy way of saying we dunk them in superglue.” The porous nature of the figurine material (primarily gypsum plaster) absorbs the superglue into the model, making them hard and easier to handle while making the colour pop.

Another round of sanding smooths out the surface and it’s finally warmed in an oven and dipped in a medical grade paraffin wax to seal everything in and give the figurines a proper shine. With the process finished, the figurines are either shipped out to the customer or picked up in person.

The final product is a surprisingly realistic figurine that borders on the uncanny valley. Textured clothing and an accurate beard are the standouts. Selftraits is at its busiest around the holidays —creating figurine Christmas tree ornaments—except when a sponsorship with GoDaddy has them recreating the entire Toronto Raptors roster for its Itty Bitty Ballers campaign. 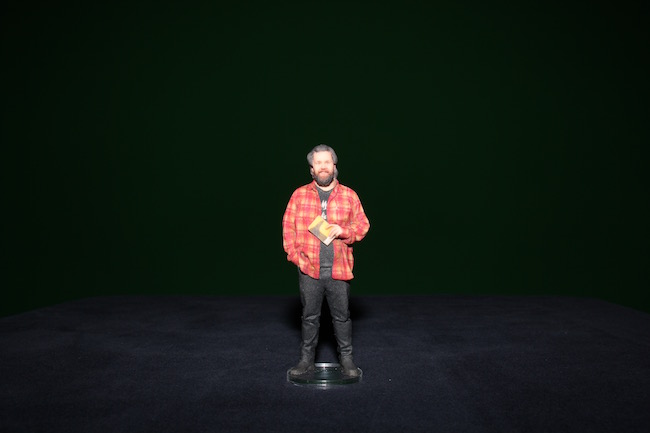 With the variety of work Objex takes on, Cory is constantly bouncing from project to project, whether it’s driving out to a customer to scan an object for an eventual print or installing a Cobra booth in Times Square, he’s rarely, if ever, bored. For him and the team, Objex is in it for the long-haul, building the business methodically and always with a love-it-or-leave-it mentality.

“We get to build cool things every day, why would I ever do anything else? I’ll continue doing this until the day I have a heart attack on my shop floor there’s no question,” Cory says.