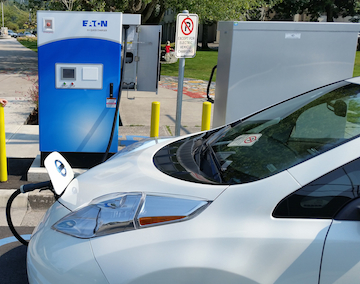 PARIS — Ontario’s Liberal government will hand out $20 million in grants next year to help create a network of public charging stations for electric vehicles.

“This program is part of Ontario’s new, $325-million green investment fund,” Wynne announced Tuesday at the climate change talks in Paris. “We know that for electric vehicles to take off in Ontario there has to be the infrastructure in place.”

Full details of the program will be available later this month.

Wynne said Ontarians want to take part in the fight to reduce the greenhouse gases that contribute to climate change.

“There is a real concern about climate change, but that concern can’t be allowed to just be passive. There has to be a way for people to take action,” she said. “With personal vehicle emissions representing a sizable portion of Ontario’s greenhouse gas emissions, driving electric vehicles is a tangible way for people to make a difference.”

Shifting to low- or zero-emission vehicles is vital to reaching Ontario’s “ambitious” greenhouse gas reduction goal of 80 per cent of 1990 levels by 2050, added Wynne.

“It’s why we have rebates and incentives for people who purchase EVs, and why we’re making it easier to cruise around in an electric vehicle with today’s announcement,” she said.

Ontario provides rebates of up to $9,500 for people who buy electric vehicles, and also offers rebates for installing EV charging stations at home.

The new program is for the next generation of chargers, known as level 3, which cost up to $40,000 and can power a car back up to 80 or 90 per cent of its capacity in under a half hour, said Transportation Minister Steven Del Duca.

“One of the challenges is that people have what we call ‘range anxiety,’” he said. “They’re not in a position to feel comfortable that they can drive certain distances and know that they’ll have an easy and affordable way of refuelling.”

People and companies that want to set up EV charging stations will have to apply to the government for funding, which will be doled out on a first-come, first-served basis said Environment Minister Glen Murray.

“This is really a kick-start program, as is our cap and trade program that will come into place in 2017,” he said. “We want to expand these programs, but we want to get some experience in Ontario on a reasonable scale.”

“It’s almost like they’re spending the money they’re going to get from the carbon tax before actually telling us what it’s going to cost and what the plan is,” he said.

There are 5,400 registered electric vehicle owners in Ontario, but only five fast-charging stations, and they’re all in the Greater Toronto area.