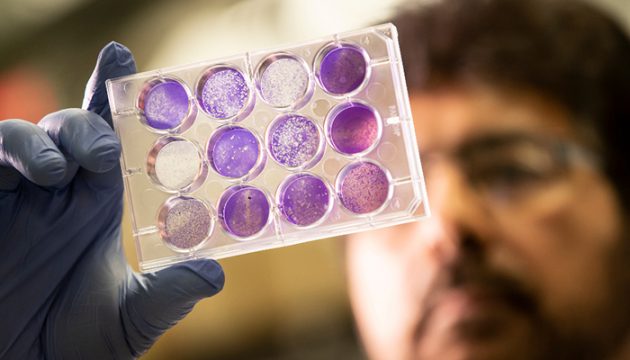 Ali Ashkar, a professor of Pathology and Molecular Medicine specializing in immunology, is a co-author on a paper describing a new way to store fragile vaccines. (Photo credit: McMaster University)

Ontario researchers say they’ve come up with a simple way to store vaccines at higher temperatures for weeks at a time, potentially solving a major problem in the fight against preventable diseases around the world. The cheap technology from the team at McMaster University involves the use of a sugary gel that allows for easier, longer shipments of vaccines that typically need to be consistently stored at cold temperatures.

‟If we can make vaccines easier and more accessible through technology, then we can save a lot of lives,” said Vincent Leung, a chemical engineering professor and the lead author of the study that was published Tuesday in the journal Scientific Reports.

Most vaccines require the ‟cold chain,” an uninterrupted refrigerated supply chain where they’re stored at temperatures between 2 C and 8 C at all times. Otherwise, the effectiveness of vaccines can be greatly affected, the study notes. Leung worked for four years on the project as part of his doctoral research and had help from other disciplines, including biochemists and immunologists, he said.

The solution the researchers devised is simple. McMaster chemical engineers had previously created a sugary gel for use in various applications, including an edible coating that can prolong the shelf life of fruits and vegetables.

The research team mixed two sugars – pullulan and trehalose – with the vaccines and let them dry, either by air, or vacuum to speed up the process. The gel seals in the vaccine, which can later be reconstituted with water by clinicians in the field and given to patients.

‟It’s easier to think of Listerine breath strips because that’s the main material,” Leung explained. ‟It will form a film like that, then (is) put into a vial for deployment.”

For the study, the research team stored mixtures of the sugary gel and numerous vaccine types at various temperatures for different lengths of time and then tested the vaccines.

They found, for example, that ‟enveloped DNA vaccines” that usually require consistent cold storage, such as the herpes simplex virus type 2 vaccine, retained their efficacy for at least two months of storage at 40 C with the use of the sugary gel. The team also showed the inactivated influenza vaccine remained effective after three months of storage at 40 C.

‟This can really improve deployment and give easier access to those that don’t have refrigeration or access to electricity,” Leung said.

The fact that the dried gel vaccine can easily be reconstituted by clinicians in the field could make the storage and transportation method invaluable in certain situations, such as the delivery of Ebola vaccines in remote areas of Africa.

‟Part of our goal was to have a very simple and cost-effective solution to address this accessibility issue for vaccines,” Leung said.

The research team is now looking at partnerships and more funding to further develop the technology, and is also going through the proper regulatory procedures to be approved by the likes of Health Canada and the U.S. Food and Drug Administration.

‟The good thing is the sugars we’re using are already used in the food and drug industry and approved by FDA and Health Canada,” Leung said. ‟On that end, it should not be as hard to get it approved.”
www.mcmaster.ca