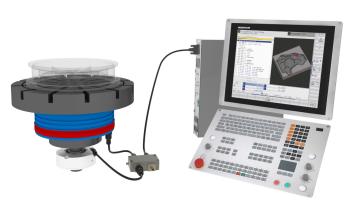 HEIDENHAIN introduced upgraded versions of its RCN absolute angle encoders series that allow three times the permissible speeds of the older RCN encoders, which is useful for fast rotating axes and direct-drive motors. When paired with an EIB 5211 sensor box, these RCN encoders transfer the temperature of the encoder and a direct-drive motor, which allows the system to be pushed to its thermal load limits. In addition, the improved RCN line features optimized scanning performance in that liquid contamination or condensation won’t affect its operation. The improved models share the same profile as previous models and feature the EnDat22 (FS), EnDat02, Fanuc05 and Mit03-4 interfaces.
www.heidenhain.us