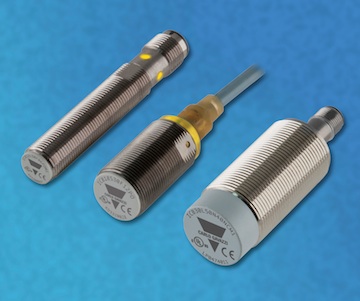 Carlo Gavazzi has expaned its ICB Inductive Proximity Sensors Series to include “Extra Extended” range sensors that increase sensing distances up to 10mm (M12), 20mm (M18), and 40mm (M30). The series microprocessor-based design allows calibration after the assembly and simplifies OEM customization requests. The line include an easily-viewable diagnostic LED and an operating frequency up to 2,000 Hz. All ICB Series sensors are cULus listed, and rated for operation from -25°C to +70°C (-13° to +158°F). The series is a complete range of 3-wire DC inductive sensors with long or short nickel-plated brass housings, for flush or non-flush mounting, either normally open (NO) or normally closed (NC) PNP or NPN outputs. Connection options include either a 2-metre PVC cable or M12 disconnect plug.
www.GavazziOnline.com