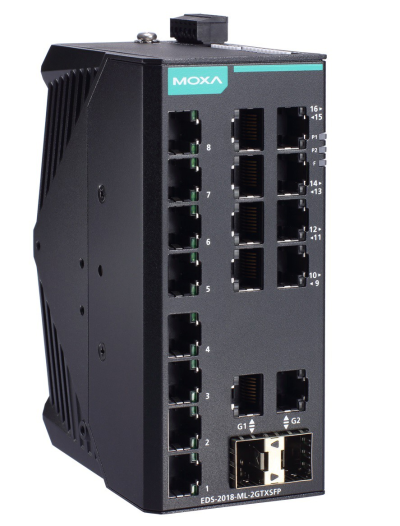 Moxa introduced its EDS-2000 series of unmanaged Ethernet switches featuring up to 16 Ethernet ports and two Gigabit combo ports. The switch line enables fiber uplinks of more than 100 meters are possible due to the two Gigabit combo ports on several EDS-2000 models. The Moxa EDS-2000 Series features DIP switches on the top panel to enable Quality of Service (QoS) and Broadcast Storm Protection (BSP). Available in five designs within two families: the EDS-2000-EL and the EDS-2000-ML. The entry-level EDS-2000-EL Series is designed for general automation, while the EDS-200-ML is intended for mission-critical automation in hazardous locations. Both feature high EMC resistance and an IP40-rated housing to withstand harsh environments, extreme temperatures (-40 to +75° C), vibrations and shocks.
www.moxa.com