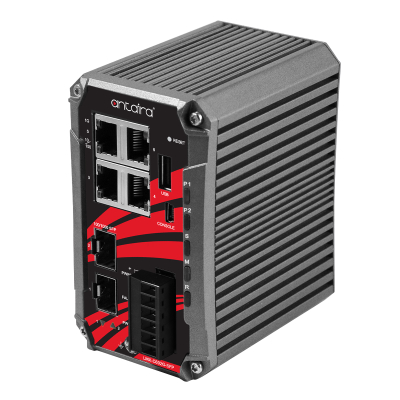 Antaira Technologies launched its LMP-C602G-SFP-bt(-T)-V2 and LMX-C602G-SFP(-T)-V2 series of 802.3bt industrial PoE 6-port managed Ethernet switches. Designed for applications that require up to 90W of PoE power, The LMP-C602G-SFP-bt series encompasses layer 3 industrial managed Ethernet switches, with a 48 to 55VDC high voltage power input. The LMP-C602G-SFP-bt-V2 is also IEEE 802.3bt compliant and has a built-in PoE DIP switch to enable or disable the PoE function. The LMX-C602G-SFP(-T)-V2 accepts a 12 to 48VDC voltage power input. Each switch is designed with This industrial switch series provides high EFT surge (2,000VDC) and ESD (6,000VDC) protection. There is also a built-in relay warning function to alert maintenance when power failures occur.
www.antaira.com