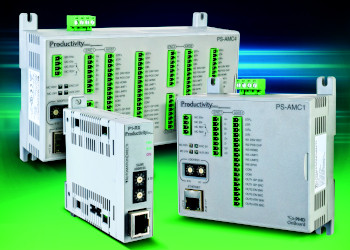 AutomationDirect has added PS-AMC motion controllers that are capable of up to 4 coordinated axes of motion per controller (PS-AMC4) with differential encoder feedback for each axis and a maximum switching frequency of 1MHz. Up to 24 general-purpose high-speed inputs and 12 general-purpose high-speed outputs are also included. Available in 1, 2, 3, or 4 axes models, the AMC controllers are auto-discovered in the company’s Productivity Suite programming software, which has numerous built-in motion instructions.

The company also released its Productivity1000 remote I/O module, which provides remote I/O for both the P1-550 and P2-550 controllers. Up to 4 P1-RX remote modules can be used with the P1-550, and up to 8 can be used with the P2-550. That adds an additional 512 I/O points to the P1000 system and an additional 1024 for the P2000 at a lower cost than the existing P2-RS expansion module. All P1-RX modules and connected I/O are auto-discovered in the Productivity Suite programming software with pre-assigned tags for each I/O point that can be used right away in the ladder code or modified as needed.
www.automationdirect.com