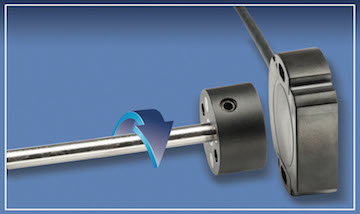 Novotechnik, U.S. introduced its RFC4800 Series of touchless angle sensors that measure angular position up to 360°, revolution counter and speed—with J1939 CANBus interface in addition to CANopen. The series’ features include programmable zero point offset, measurement averaging and sign of rotational direction. The sensor line also has a resolution of 14-bits across 360°, repeatability of 0.36° and independent linearity of ±0.5% of full scale. Other RFC4800 Series output interfaces include analog voltage and current, as well as digital outputs options—IO-Link, SSI, SPI, and incremental. Single and multi-channel versions of the RFC4800 Series are available. Sensors are sealed up to IP69K and operating temperature range is -40 to +125 °C. Mean time to failure is 76 years.