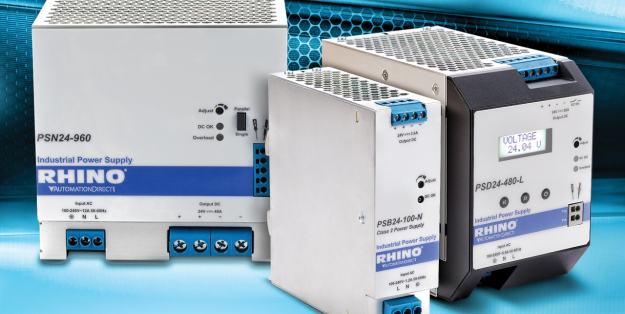 AutomationDirect released its RHINO PRO PSN and PSD series switching power supplies. Available in single-phase and 3-phase input units, the series feature universal AC input voltage range (1-phase units), a built-in constant current circuit for charging applications (3-phase units) and a power boost of 150% for up to 7 seconds. Current output is available from 3.4 to 40A at 24VDC. A built-in DC OK contact and DC OK/Overload LED indicator are common on both series. The RHINO PSD series, with built-in LCD display, also feature built-in active power factor correction that is up to 96% efficient. The full power temperature rating is -25°C to +60°C at 5,000m (16,400 ft.).
www.automationdirect.com