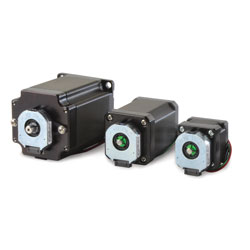 CUI’s Motion Group has launched a line of stepper motors paired with their AMT11 incremental encoder series. The NEMA‑AMT112S stepper servo motor family is available in compact NEMA 8, 11, 14, 17, and 23 frame sizes with a step angle of 1.8-degrees and holding torques ranging from 3-270oz-in (0.021-1.90N-m). When paired with a controller, the motor and encoder combo gives closed-loop feedback for a complete servo system. The high accuracy modular encoder features 22 programmable resolutions from 48-4096PPR, a digitally set zero position, and CMOS voltage output waveforms. The resolutions are fully programmable via the company’s AMT Viewpoint software without having to remove the encoder from the motor. Due to the proprietary capacitive technology, the series is not susceptible to contaminants such as dirt, dust, and oil typically encountered in industrial environments.