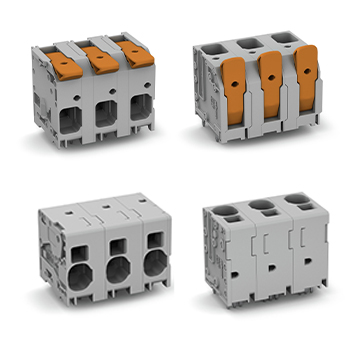 WAGO expanded its 2600 Series PCB terminal blocks line. The added versions allow for increased pin spacing and double pinning to allow for expanded current capacities while maximizing voltage ratings. Options for these terminal blocks now include UL ratings from 85A and up to 1000V. Below is the list of products and their new variants: The 2626 and 2606 Series is available in pin spacing 12.5mm, but rated up to 38A/600V and 42A/600V, respectively. The 2636 Series and 2616 series are available in pin spacing 15mm, and rated up to 85A/600V and 78A/600V, respectively. All series are UL1059 certified for 1000V in single pole configurations. Additional factory-assembled spacers also allow for the creation of multi-pole configurations that meet 1000V spacing requirements.
www.wago.com