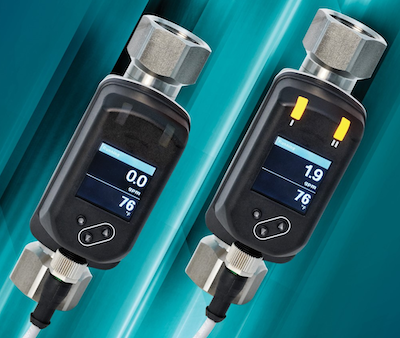 AutomationDirect released its ProSense VFS series of vortex flow sensors as a low-cost method for measuring flow of water-based liquids independent of pressure or temperature fluctuations. The VFS series is set up to measure both flow rate and temperature using the pushbuttons and display. Available with 1/2- or 3/4-inch NPT process connections, the VFS (-1001) series offers two separate outputs that can be used either as a flow or temperature limit switch or to monitor continuous flow rate or temperature. The VFS (-1002) series offers two analog flow/temperature monitoring outputs. The TFT color display and switch point LEDs are used during configuration and operation to provide clear indication of both flow and temperature measured variables simultaneously.
www.automationdirect.com