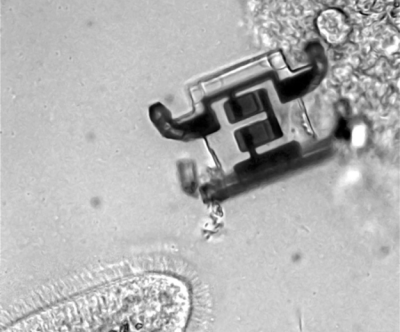 Researchers at Cornell University have created the first micron-scale robots with semiconductor components that allow them to be controlled and moved using standard electronic signals.

Roughly the size of paramecium, the diminutive robots measure approximately 40 to 70 microns long, 40 microns wide and only 5 microns thick. Each micro-robot is composed of a photovoltaic silicon circuit and four electro-chemical actuators for propulsion. Given their size and silicon make up, the small bots can be manufactured in large numbers, simultaneously – around 1 million robots per 4-inch silicon wafer.

The robots are controlled by alternately flashing laser pulses at the front and back photovoltaics that power each set of legs, thereby causing the to “walk”. While strong and robust, the research team says they only require 200 millivolts and 10 nanowatts to function.

The micro-robots are the creation of a team led by Cornell University physics professor, Itai Cohen, Paul McEuen, the John A. Newman Professor of Physical Science and their former postdoctoral researcher Marc Miskin, now an assistant professor at the University of Pennsylvania.

According to the researchers, their robots are the basis for robots with more complicated electronics and onboard computation that would allow them to restructure materials, suture blood vessels or probe the human brain.

“Controlling a tiny robot is maybe as close as you can come to shrinking yourself down,” said Miskin, the study’s lead author. “I think machines like these are going to take us into all kinds of amazing worlds that are too small to see.”