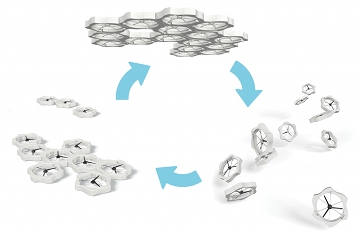 Researchers at ETH Zurich in Switzerland have created the Distributed Flight Array (DFA), a collective of identical helicopter modules that can autonomously seek each other out and bond to create a multi-rotor drone.

On land, small wheels on each of the individual hexagonal DFA units propel them toward each other. Once in proximity, they magnetically “snap” together to create random shapes. The units then exchange configuration data to determine the overall structure’s shape and flight requirements.

Each module is a self-contained unit with onboard power, sensors, computer and motor, but the task of keeping the array in level flight is distributed across the network of vehicles. While a single module can’t fly on its own, due to the torque of the single rotor, multiple units can compensate—half the rotors spin in one direction while the other half spin in the opposite direction.

In addition, inertial sensors in the individual modules monitor tilt and roll while on-board processors use the sensor data to determine moment-to-moment flight requirements. Depending on the multi-propeller’s shape, the DFA units work together to dynamically vary the speed of each rotor to maintain balance. To land, the rotors stop and the DFA modules break apart to start the self-assembly process again.

The researchers admit that the DFA may not have a commercial purpose but is used to teach students about distributed networks using a hands-on approach.
www.idsc.ethz.ch/Research_DAndrea/DFA