Rittal System Ltd. is set to relocate to a new site after over 15 years ago at its current location on Pacific Circle in Mississauga, ON. 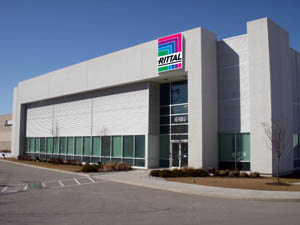 Rittal opened its Canadian subsidiary after having revolutionized the enclosure industry by introducing innovative solutions far ahead of its time, the company says.

At that time Rittal saw the future opportunities in opening a Canadian subsidiary, and on January 1st 1995, Rittal Systems Ltd. was developed and began operations out of its Pacific Circle address.

On November 15th, 2010 Rittal will officially say goodbye to the Pacific Circle location and open a new state-of-the-art office and warehouse facility located at 6485 Ordan Drive in Mississauga (above).

Rittal’s new headquarters will feature a much larger warehouse to better serve the Canadian market and its distributors.

In addition to the enhanced warehouse space, Rittal will unveil a new interactive showroom to allow customers to test out the new innovative solutions which have made Rittal so successful in Canada.