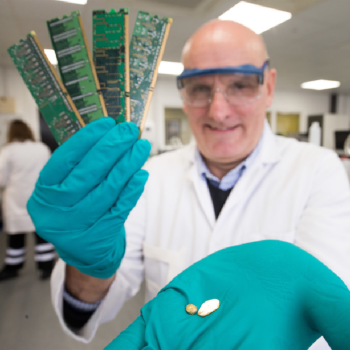 According to the The Global E-waste Monitor 2020 report, more than 50 million tonnes of electronic waste is produced globally each year, but less than 20% of it is currently recycled world-wide, meaning that US$57 billion in precious metals (e.g. gold, silver, copper, palladium) are mostly discarded.

To confront this waste, the UK’s Royal Mint announced it has contracted Alberta-based Excir to use the clean tech start up’s patented process to extract and recycle gold and other precious metals from electronic waste. According to the Canadian firm, its technology can selectively recover 99%+ of gold from e-waste, such as circuit boards, within in seconds.

“This partnership represents a significant milestone for The Royal Mint as we reinvent for the future as the home of precious metals in the UK,” said The Royal Mint’s Chief Executive, Anne Jessopp. “The potential of this technology is huge – reducing the impact of electronic waste, preserving precious commodities and forging new skills which help drive a circular economy.”

According to the mint, initial use of the technology has produced gold with a purity of 99.99% and engineers are currently working to scale up Excir’s material processing and chemical extraction process to mass production levels.

When scaled up, the Royal Mint says it will be able to recover precious metals, including potentially platinum, palladium, silver and copper, at room temperature at its site in South Wales, rather than exporting e-waste off-shore at high temperature smelters.
www.royalmint.com
www.excir.com