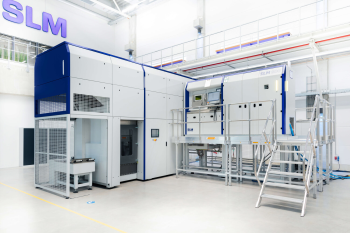 Safran Landing Systems announced it is working with SLM Solutions to test the feasibility of using the selective laser melting process to produce a component of a nose landing gear on a bizjet.

According to the French aerospace and defence company, the component in question is part of an assembly that transfers loads from the wheel to the aircraft structure and is retracted after take-off. As such, the company built the part from titanium alloy due to its resilience and corrosion resistance, plus the fact that it doesn’t require special surface treatment. Redesigned for metal-based additive manufacturing, the test part weighs roughly 15% less than traditional component, the company says.

“We chose SLM Solutions as a partner, because of their expertise, and the SLM 800 machine, which exactly meets our requirements in terms of machine size and reliability,” said Thierry Berenger, additive manufacturing project leader at Safran Landing Systems.
www.safran-group.com
https://www.slm-solutions.com