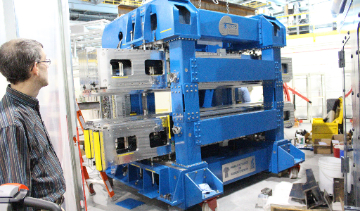 It may sound like something Marvin the Martian would accuse Bugs Bunny of stealing but Saskatoon-based RMD Engineering has built what it claims is the world’s largest elliptical polarizing undulator (EPU) for the Canadian Light Source (CLS) synchrotron, an electron accelerator used to probe the structure of matter.

Essentially a particle insertion device, the EPU uses powerful rare earth magnets to cause the synchrotron’s electron beam to generate X-rays of controllable polarization. Scientists can then use the information obtained to help design new drugs, develop more effective motor oils and build more powerful computer chips, among many other applications.

Currently, CLS has two EPUs in operation but the state-of-the-art device is unique not only for its size but its ability to switch between high and low energy experiments. The RMD Engineering-built EPU measures 4.17 x 2.69 x 2.8m, weighs approximately 13,500 kg and can produce anywhere from 15-200 eV to 200 – 1000 eV.

RMD Engineering owner Jim Boire said that turning the design of the EPU into a state-of-the art machine was a considerable challenge. His company spent over 9,500 work-hours of engineering, machining and assembly to put together the nearly 1,100 parts, including 865 manufactured components.

Now that the RMD-built structure has arrived at the synchrotron, CLS engineers will calibrate the machine and position 1,560 rare earth magnets onto the EPU. Once testing and calibration is complete, the EPU will be moved into the storage ring area of the synchrotron for use in experiments on a new beamline called QMSC, an experimental station that will be operational in 2015.
www.lightsource.ca
www.rmd-engineering.com